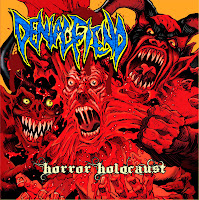 Denial Fiend has been kicking about Florida for a few years now, a collection of lesser known entities hailing from various underground masters. Perhaps the best known of these would be bassist Terry Butler, alumni of Death, Six Feet Under, Massacre and Obituary, but Kam Lee (Death, Massacre, many others) and Curtis Beeson (of Fester and Nasty Savage) also played on the debut They Rise in 2007. This time out, Butler and guitarist Sam Williams have enlisted D.R.I.'s Rob Rampy to round out the roster, but more importantly they somehow wrangled Blaine 'Fart' Cook from Seattle splatter-gods The Accüsed to man and mangle the microphone. And that, my friends, is what forces Horror Holocaust beyond the precipice of mere curiosity to the realm of enjoyable.

Have you ever wanted to hear Cook front a more aggressive mesh of thrash and death metal with his unique and psychotic presence? Denial Fiend delivers this on all accounts, with thick and potent 80s thrash riffing tone that often explodes into old school, tense death ("Flesh Coffin" and the title track) metal. More often, though it still bears the brunt of bloodbath crossover that Cook is accustomed to, and the man is all over the place, snarling and snearing so impossibly that he sounds like the entire population of a feline adoption shelter being tortured simultaneously. You don't bring this guy home to mother, you hit him with a shovel and hope you can run away fast enough that he can't catch up to you. He's one sick, entertaining fuck, and perhaps one of the most unsung underground heroes in all of US extremity. Yeah, the rest of the band do their job here, adequately, and the riffs and leads erupt like flesh grenades in "A Fiend Without a Face", "Stuck Pig/Bleeding Out", and so on, but about the only track on which Cook doesn't steal the scene is "Dunsmoor", an uncanny, bass-thick instrumental ridden by warped guitars.

Horror Holocaust is a marked improvement over its predecessor, but I admit that's because it sounds like a natural successor to The Accüsed. There's just no getting around that. The production is pretty top notch, and the entire band earns its keep. The lyrics are frivolous fun centered on the obvious horror camp one would expect, but they avoid dowsing it all in the stereotypical movie samples. The sophomore also has the potential to appeal to a wide range of audiences, from the retro thrashers to the crossover kids to the TROMA addicts; old school freaks into early Necrophagia, Repulsion, Impetigo, or the horror punks into Blaine Cook's alma mater. Shit kicking chaos that understands the importance of the riff without ever taking itself too seriously, the soundtrack to a night of digging up graves just to piss on their contents.