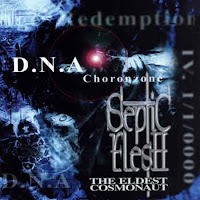 The Eldest Cosmonaut EP was released as a companion to the strong and alluring 1998 full-length A Fallen Temple, perhaps to serve as a promotional tool, but more likely to contain all of the overflow from that album that might have worn out its welcome. Then again, the album itself was only 54 minutes long...and it would have been much more prudent to include the "Underworld" Act III and finale there with the earlier chapters, and never mind ever releasing this, but the band and Holy Records probably thought this was a sweet treat for the fans, especially since it was one of those 'multi-media' pieces that included a video. In this case, "The Eldest Cosmonaut" video is pretty crappy, the standard shots of band jamming while the female vocalist sits on her duff screaming from some industrial closet, her male counterpart standing dignified in the dark.

Really, the usual egocentric ablation that most videos are born from, and further evidence that the overwhelming majority of such media outlets are, in fact, retarded. The song itself is decent, it suffers from some of the same overbearing female vocal volume that plagued Ophidian Wheel, but the riffs and gutturals create an appropriate, depressing miasma flush with their evolution over the past three albums. That said, this is also on the album, in a non-edit form. The true centerpiece here is the extensive "Underworld Part III", an extensive neo-classical epic that features both male and female vocals, a Septic Flesh opera that not only foreshadows the members' darkwave, classic side project Chaostar, but was actually used as a demo reel for said entity (along with the rest of the "Underworld" sequence). Christos Antoniou was always interested in branching out into the field of composer, something he has accomplished through Chaostar (and the pure orchestral bonus disc of The Great Mass), but Ophidian Wheel and A Fallen Temple were the real turning point, where the dream was manifest into reality.

The rest of the EP is hit or miss, fist with the pure orchestral conclusion of "Underworld", and then the Gothic metal extravaganza "Woman of the Rings" which is redolent of what Therion were doing from about 1995-2000. Simple, doom derived riffs adorned in clean male vocals and a lucid, dreamy efflorescence, with occasional and not exactly abrupt excursions into the glorious and guttural death of the full-length. Ultimately, this is not a great song, and since you've already got "The Eldest Cosmonaut" elsewhere, much of the EP feels like a waste. The exceptions are the "Underworld" chapters, which belong with their brethren and not in underwhelming isolation, so all of the points I award this are strictly for those. Also, this EP looks fucking hideous.