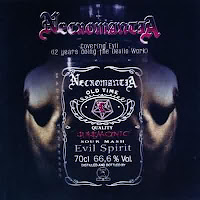 Covering Evil is another of those myriad cases in which a potentially awesome fan package is left to suffocate in its own rot. The Greek legends might damn well have assembled a their various demos and promos under this banner, then combined them with the contents of Disc 1 to create something of actual value to their audience. But no, instead we get a handful of covers and one new song, while the 2nd disc in this offering is delegated to re-printing material from the band's first three full-lengths, Ancient Pride EP and the Black Arts Lead to Everlasting Sins split. I'd expect this sort of treatment for any popular metal band, really, but an underground obscurity such as this one? What's the fucking point? People who love Magus Wampyr Daoloth and Necromantia already have those damn albums.

At any rate, the new song "My World, Your Hell" is appreciably aggressive, akin to the ferocity the band were displaying on IV: Malice. There are some keyboard strikes in here for tension and effect, and some wildly voracious bass lines that fly almost entirely off the handle. It's exciting, to say the least. We already heard the band cover Manowar's "Each Dawn I Die" on the Ancient Pride EP, so we know their love for old school heavy metal is resolute. That's a good thing, then, because ALL FOUR of these covers follow the same train of thought. Omen's "Death Rider" (Battle Cry, 1984) is made thicker and more venomous with the 8-string bass, though the mix is admittedly choppy, while Iron Maiden's "Number of the Beast" is somewhat more natural, since the bass was so strong in the original. They manhandle another Manowar tune here, "Demon's Whip" (The Triumph of Steel, 1992) and I found the treatment far more sinister than the original, but the best of this lot is their rendition of Running Wild's "Mordor", (Branded and Exiled, 1985), which is fucking brutal and classy. A great selection, though apparently this and the Omen cover were both available on various versions of the IV: Malice album.

Alas, this is where the fun ends, for disc two is just nine tracks we've already heard, in a sort of reverse chronological order. "Those Who Never Sleep" and "Murder, Magic and Tears" are included from the latest album (IV: Malice); "Ancient Pride" and "For the Light of My Darkness" (Ancient Pride EP); "Black Mirror", "Pretender to the Throne" and "Scarlet Witching Dreams" (Scarlet Evil Witching Black); and "Les Litanies de Satan" and "Lord of the Abyss" (Crossing the Fiery Path). There's nothing necessarily wrong with the selection, and many of these are good songs, but they all fit better in their respective places than meshed together here, and anyone with half a brain wishing to trace the band's evolution could just do so by listening through the releases he/she already owns. Ultimately, if the covers and new original were released as an EP only, this might be pretty cool, but the latter, more substantial disc is a waste of time and money.