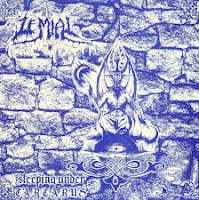 Like their peers Rotting Christ and Septic Flesh, Zemial were yet another of those formative Greek extremities surrounding the creative efforts of a pair of brothers: Chris and Dimitrius Kokiousis, known here as Nocturnal and Necrosauron. Yes, there was an entire necro- club happening in this scene. However, Zemial is arguably the most qualified to bear the prefix, because while comparisons could be drawn to the earlier works of Rotting Christ, this is the act most closely related to the raw, rasping sounds coming from the northern European territories, or rather, the most intimately drawn from the influences of Hellhammer, Celtic Frost, Bathory, and so forth that were prevalent during the 2nd wave's rise to prominence.

That said, Zemial were formed nearly as early on as their counterparts in Varathron and Rotting Christ, at the end of the 80s, and produced a handful of demos before getting a shot at their own 7" inauguration: Sleeping Under Tartarus. There are some passing similarities in these three tracks to those of Passage to Arcturo, in terms of tempo and composition, but the brothers focused more intently on open chords with a primal, sawing guitar tone and vocals more along the line of Quorthon than Sakis Tolis. Simple synthesizers are imbued to the simple riffing patterns in the title track, to create a haunting repetition. The drums are in general very basic, shuffled rock beats that rarely pick up in intensity outside of the occasional shift towards a mid paced acceleration, but in general they crash along as slowly as the rest of the writing.

Of the three tunes on the EP, I believe "Falling into the Absu" is the most appealing. The titular "Sleeping Under Tartarus" and raging closer "The Scourge of the Kingdom" both suffice as early examples of their genre, but "Falling..." has a more doomed sway to it, an eloquent exultation created through the severe, rasping drawl of the vocals and the guitar melodies, not to mention the drums are just more interesting through the groove and fills. When one considers just how many echoes the grueling and primitive Burzum, Hellhammer, Bathory and Darkthrone
have created down through the decades, though, Zemial seemed fairly fresh and authentic, an obscure band of grim elder statesmen who, while not particularly innovative, were well ahead of the herd that followed. Sleeping Under Tartarus is about as interesting as Passage to Arcturo: not exactly overflowing with moments of musical magnificence, but evocative of that unshakable nostalgia and vile sincerity that stalks the earlier cults within the medium.