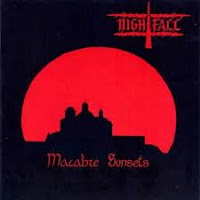 Macabre Sunsets is both a step forward and backwards from the Nightfall debut Parade Into Centuries. Forward in that it more aptly evokes the hybrid of death, black and Gothic metal atmosphere that the band were trying to craft on the earlier record, but back in that the production is often quite boxy, overly loud and annoying for the vocals. What I most enjoy here is the substrate of sorrowful melodies being strung out over the percussive barrage, powerful if corny synthesizers lines; elegies being cast above a churning and grunting war machine, but once broken down into its constituent elements you wonder just how much better this might sound with a more potent balance of such struggling weights.

I'd liken a lot of the slow but sure material here to countrymen Rotting Christ. Tracks like "Precious/All My Love is Lost" and "Bitterness Leads Me to My Saviour Death" stride along with that same fell glory, that warlike passage into the archaic. However, the presence of the guttural vocals also places it square in Septic Flesh territory. A striking balance of two of their greater peers, and not unwelcome. Occasionally through, as in the latter half of the opener "Odious" or several accelerations during the longer tracks, the band breaks into this cluttered, primitive blast beat which feels as if its about to fall to pieces. They do a lot of atmospheric breaks just as on the debut, but the highlight would be the doomed melodic glaze of "Poetry of Death", in which sad and driving guitar sequences are spliced into thick, rolling pianos in an epic median between grace and gore. Like Parade Into Centuries, they also include an alternate, lengthier take on one of the tracks: "As Your God Is Falling Once Again", a swollen, 11+ minute cut which is mixed more evenly than the earlier album version.

Had Macabre Sunsets been produced with more care, then I would probably place it above the debut in overall quality. Alas, that is just not the case, and the rather crude standards set it just below its predecessor in overall effectiveness. But what's most interesting here is just how it derives its influences not only from traditional black and death metal, but the earlier Gothic doom sects like My Dying Bride and Paradise Lost. This was a band who might have tread a number of paths down the line, unafraid to mix and match mediums, though they inevitably veered off into a more crunchy, accessible Gothic metal territory that was a turnoff for those enamored of their ominous, oppressive roots. This sophomore is one of their better works, but the sound quality and somewhat bland, Romantic doom lyrics hold it back from