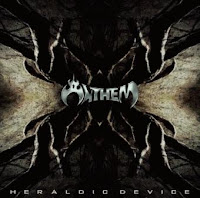 Few Japanese acts (in any medium) have brought me as much joy as the melodic speed metal stalwarts Anthem. First introduced to their music through countless bargain record bins and mail orders in the 80s and 90s, I've been constantly impressed with their devotion to a sound that so few people truly appreciate anymore. The first six studio albums (1985-1990) were loaded with quality songwriting comparable to the great American and European acts of the day like Accept and Judas Priest, with the added flair of the mildly Engrish accent and the competent all-around performances. I mean, this band was (and is) better than fucking Loudness, a band who caused a far larger splash internationally! And I actually enjoy Loudness, so that is saying something...

Well, there was a bit of a dry stretch in the 90s through albums like Domestic Booty and Heavy Metal Anthem, but they suddenly hit full force again with 21st century records like Overload ("The Voices" is so good it hurts), Immortal and the superb Black Empire a few years back. Heraldic Device, the band's 14th full-length, more or less follows the examples set by its direct predecessor: lots of variation, insanely polished and competent musicianship, and a production that rivals anything coming out of Europe. Where bands like Hammerfall are tripping over themselves attempting to branch out their sounds (and not quite succeeding), Anthem plays it pretty straight, with fast, heart-pounding rhythms and reliable chorus sequences ("Contagious"), throw down 80s styled block parties ("Go!"), and even a moderate attempt to recapture the glory of Scorpions rockers "Rock You Like a Hurricane" or "No One Like You" (here dubbed "Blind Alley").

They can also go just as big and mystic as their peers Concerto Moon or Balflare with the broad traverse cut through "Wayfaring Man", or soften their hearts without going all ballad on us ("Remains"). Personally, I prefer when the band evokes the steamy street appeal of their 80s catalog ("In the Dead of Night", "Code of the Silence"), but the majority of the new tunes here are at worst solid, and at best dynamo. It's not equivalent to Black Empire in terms of its overall quality, but Eizo Sakamoto's familiar pipes, and Akio Shimizu's penchant for flawless shred will ensure that the diehards are still having a good time, and if you enjoyed any of their releases over this past decade, then there's hardly a reason to hold back here, even if its not as catchy nor revelatory as its predecessor, nor as rugged and effective as its elderly 80s siblings. Worth hearing for any ardent J-metaller.