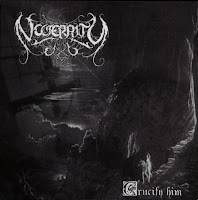 As solemn sharks yet reflecting on the blood of their latest kill, Greek imprints ISO666 and Nocternity were quick to collaborate on another release in the Crucify Him EP. This shorter work was a repository for the band's earlier material that did not conform to the sea goddess concept of En Oria, lyrically or aesthetically. Indeed, the songs written here are equally as vile and reproachful as far as their malevolent architecture, but they possess a more airy and volatile nature as if they were necrotic winds howling through some forsaken abyss or pandemonium. The riffs themselves do not deviate from the style manifest through En Oria, still a window into the Norwegian scene of the early 90s (Burzum, Mayhem, old Satyricon), but they do seem better constructed and less lethargic than the debut was often prone to be.

The intro, "Stella Tenebrarum", is not as impressive as the synthesizer pieces found on that submerged precursor, but more of a distinctly minimal ambiance joined by tranquil, clean guitars and light vocals. This creates an immediate contrast when the harsh but melodic titular track is engaged, slower, roiling tragedies alternating with accelerate bursts of streaming anxiety. I will say, though, that I found the earlier riffs to be predictable. It is the bridge here, with its return to clean string plucking and subsequent explosion into a more memorable melodic sequence, that I found more compelling. "Lunar Innuendo" begins with another ambient passage, but succumbs to more explosive blasting, before ultimately fading out to acoustics. My favorite track, though, is definitely the closer "Perdo Corporem", in which the threads of atmosphere are affixed to the bleeding, high velocity guitars and gnarled, oppressive vocals, giving of a hostile glamour redolent of Emperor's In the Nightside Eclipse, sans the symphonic side.

In all, Crucify Him does feel slightly more consistent than En Oria in execution, though the lyrical themes of blasphemy, fallen angels and repression are not as intriguing. The Greeks seem to be inching toward the finish line here, without crossing it. For one, many of the faster paced rhythms fail to manifest in compelling rhythmic configurations: the unflinching speed might cast a vicious dimension to the proceedings, but the riffs themselves are often feel interchangeable, and there is little to set this apart from a wealth of European recordings throughout the mid to late 90s. That said, it's not bad, and the hellish mood and atmosphere are appropriate to its subject matter.