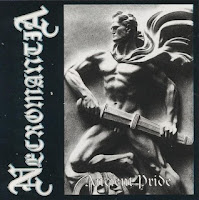 Unless my present Hellenic adventures proves otherwise, I must adhere to the foregone conclusion that Scarlet Evil Witching Black is the best black metal album ever conceived from this great country. How fucking glorious can something get? Naturally, then, it's a given that just about anything Magus Wampyr Daoloth would release beyond that would have some fairly high standards to live up to, and I'm not sure Ancient Pride passes inspection with quite that level of magnificence. It's a far less substantial release, being an EP, and there are but three new originals and one cover, but where much of the material provides the same, sweeping and ghastly bombast as the prior full-lengths, there are a few boring moments that burden it.

Most of these moments come in the opener, "Shaman", which is largely conceived of straight and generic black metal using the second bass as the guitar line. Wherever the track adopts some atmosphere (the intro, the synthesized choir background) it begins to brighten, but the actual driving riffs leave much to desire. "Ancient Pride" itself is a more glorious venture, with swinging flutes that transport into a prim pagan verse supported by Magus' gnarled vocals, synths and low-end pumping bass line, before the inevitable black metal eruption. Almost a Gothic/black initiative, and followed by "For the Light of My Darkness", which travels a comparable path to the title track, loaded with atmosphere and a soothing, tranquil bridge. Both of these tunes do lack the vicarious venom of Scarlet Evil Witching Black or Crossing the Fiery Path, but they at least they build a nice contrast against the thundering black segments.

Lastly, Necromantia have covered Manowar's "Each Dawn I Die" from the 1984 album Hail to England, and I must not so guiltily admit that it's the best thing about this EP. The track just works so wonderfully with the chugging bass-lines and Daoloth's atmospheric slather, and you get the same feelings of cheesy magnificence the original once evoked. Truly fantastic, and even if this wasn't the first Greek extreme metal band to do such a cover (Nightfall visited "Thor" on their Eons Aura EP), it's one of the better Manowar renditions I've ever heard. Even the sound itself reminds me of what the original might have been were those New York barbarians more sneering and aggressive. A fine treat to close out what are otherwise the mixed results of this 22 minute fan treatise, and just enough of a nudge that it escalates to the category of worth hearing.