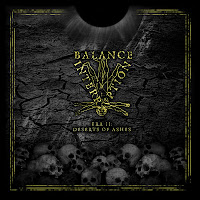 Serve the fucking machines! A decade ago, I might have thought that the notion of 'industrial black metal' would be such a natural that we would be seeing hundreds of acts in the field by now, creative and thinking sound scientists who would document the descent of all mankind into the great mechanism of his own conception. Granted, there are a fair number who have dabbled in the field and moved on, or persisted in some side project, but most seem content to stick with the traditional rock instrumentation to propel their sinister visions. This admitted scarcity is what makes a band like the Ukraine's Balance Interruption so special: they exhibit most of the traits of an industrial/black metal hybrid, but they do so without overly flouting their purely electronic elements. The results: revelations.

Era II: Deserts of Ashes sees the band join the ranks of Red Harvest, Aborym, Abigor and Thorns as having successfully bridged the Northern European, polished and dissonant black metal techniques into a poignant, mechanical landscape, and to have done so not only efficiently, but uniquely. As I hinted, much of the band's machine-like pacing is crafted directly through the drums and guitars, the former as precise as a factory, the latter almost tripping over themselves to channel forth riff after riff of both technical aptitude and well-oiled menace. Despite going overboard with so many elements, the band creates a persuasive cohesion. For example, take the track "Nine Octagonal Styars", which balances swerving, jazzy bass lines, robotic vocal processing, spikes of sinister dissonance, and even a strange, scratchy vocal sample into one of the most bizarre and engaging post-metal fusions beyond Norwegians Virus.

"Streams of Black Energy" features insane riffing amidst its stoic industrial applications, and the guitars just never stop arriving. "Taste of Enemy's Blood", "Fuck This World", "Deserts of Ashes" all deliver in spades, and even when the band thumps off a generic techno beat to open "Chaos Reign" it evolves into something ear catching and memorable. Probably the one element of Balance Interruption that doesn't stand out would be the stock black metal vocals, but then they're no less sufficient than most in the field. The fiber optic fabric of fusion here is well conceived and performed, and I very much recommend it to anyone interested in the hybrid of forms, especially if you enjoyed the past few albums from France's Reverence or the divisive Fractal Possession from Austrians Abigor. Plug on in.