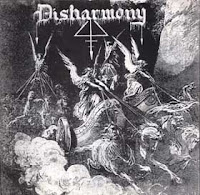 While several Hellenic metal voices were able to add themselves to an enduring chorus of decades, others were quelled long before raising more than a few verses from their hymnals. Disharmony was one such exception, the earlier of two Greek bands to use this brand, with an existence that spanned but a few years. A pair of demos in 1992 brought them to the attention of local imprint Molon Lave, who released this brief 7" EP almost straight into the annals of obscurity. The lack of interest and inevitable dissolution is just as well, though, because where Disharmony was at least competent at evoking a glazed atmosphere of melodic black/doom through the sodden pace of their writing, various elements conspire to press gang this shortplayer through the cheese grater.

Disharmony had a similar approach to their neighbors Zemial, Kawir or Rotting Christ, in that they performed in a slower and atmospheric tempo almost exclusively. The bookends of this release, "Intro (Wind's Creation)" and "And the Last Benediction..." are synth driven pieces, the former with a more ominous, ascending motion and closing incantation; the latter using a drum beat and clean guitar tone. The keyboards also factor heavily into the pair of core metallic tunes: "The Gate of Deeper Sleep" weaves overbearing rasped and corny narrated vocals over a guitar and keyboard line, often too closely related in their meter, while "Blasphemy of the Secret" has more of a straight traditional doom step that wouldn't be out of place on an early Candlemass record, though it is fitted with brief assertions thrashing acceleration and grating melodies and a laughable if slightly charming haunted house bridge enameled in a broad guttural vocal passage.

Unfortunately, where these various aspects, under more seasoned hands, might have congealed into a bewitching ritual of atmosphere and sorrow, it all sounds too jumbled and pedestrian due to the rough production. The guitars have zero to no power, and while the drums and synths remain in an average lock step, the vocals are too loud. Occasionally they break into these more busied, thrash/death rhythms, but the tone is so damned weak that they lose all impact. Even with the levels adjusted, the songs feel disjointed and disorderly, as if their structures needed more gestation before being committed to tape. The result is that The Gate of Deeper Sleep never feels as professional or serious enough to stand alongside fellow Greek 7" works like the more engrossing Sleeping Under Tartarus (Zemial) or impressive A Temple of the Lost Race (Septic Flesh). The lyrics are decent (if scatterbrained), mythic occult journeys akin to old Rotting Christ, but the music itself feels like amateur mortal toil within the gardens of Godly masterwork that their peers were far better attuned to.

Verdict: Indifference [5/10] (those dimensions make me sad)
Posted by autothrall at 6:41 AM