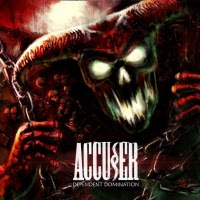 While last year's Agitation was by no means a good album, it at least started out strong, and offered a reprieve from the trendy and tedious groove thrash that Accu§er tried to pass off in the 90s with flops like Reflections and Taken by the Throat. Proving that they're not just a 'one-comeback pony', the band returns once more with what must be their strongest in 22 years, and it's all due to their decision to stick with the straight riff heavy thrash that they were writing back in the late 80s. Now, Dependent Domination is not exactly the messianic upstart that I've always felt the band would be capable of producing, and the modern flourishes of overwrought palm muted riffing can grow wearisome, but in general the album delivers a fair enough share of the tension and excitement so important to this genre.

Accu§er were never all that original to begin with, and once drew some comparisons to mighty institutions like Metallica, which is pretty much where they stand now. Imagine fusing together the late 80s Metallica, with the Testament of the following decade, and then seasoning in some Mortal Sin and modern Paradox (the music, not the vocals), and you'd come up with something similar to Dependent Domination. The guitars are energetic, thick as a brick and provide the central focus of the band, but admittedly, the actual patterns and notes all feel as if they've been written a thousand times before, and better. That doesn't stop the album from being somewhat fun, especially when they kick off with "Beneath Your Dignity" and the incredibly forceful "Torn to Pieces". "Escape from the Oath" and "Dependent Domination" also have some solid, if more clinical sequences, and "Mastering Punishment" (great title) follows suit, though it's imbued with a little too much raw chugging bounce for my taste.

The deeper in you go, though, the less inspired this 8th album feels. I couldn't remember a thing about the last four songs, and that's a fairly large chunk of it. Frank Thorns' vocals here are aggressive and have a nice, crushing, constipated feel to them, but he never tries to assert any range, or any patterns that stand to memory; just a monotonous battering ram over the more volatile riffs. The drums and guitars are concrete, and the leads in particular tight, yet like a number of other modern thrash efforts (Onslaught's disappointing Sound of Violence comes to mind), they seem to lack the flat-out sticky riffs that were so crucial to the great works of the 80s. Don't get me wrong, there is nothing excessively bad about anything that Accu§er have tracked here, but despite its relative strength compared to anything they've recorded since Who Dominates Who? (1989), there is still much distance between this band and the top flight acts who they've outlasted, but never overrun. At least they're trying, and hell, it's the best album cover they've ever used.

Posted by autothrall at 6:21 AM