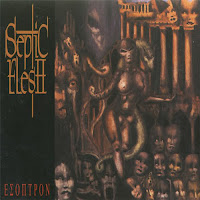 Esoptron is yet another bright example of Greek finery, though its a misnomer to label anything this brooding and sultry as 'bright'. With Mystic Places of Dawn, Septic Flesh had proven that they could immerse their audience into a lush miasma of affliction, and with its successor, that audience is once again soaked upon the torrents of tragedy. If there's a difference, though, it's that Esoptron has a mildly more accessible construction to it, a collection of simple, sailing melodies heavily processed to create the illusion of some spiral down into the netherworld. Nightmares so beautiful that their drudging backbone and guttural narration cannot out-gravitate the Gothic glare of the guitar tone and the synthesized instruments spun across the album's brief, admittedly cheesy interludes.

These do serve to break up the effectiveness of the longer compositions, and I can't say they were necessary, but they also provide the more experimental elements of the sophomore, like the droning, cavernous industrial wash of "Breaking the Inner Seal"; the tonal curiosity and glittering chimes of "Astral Sea"; the flighty flutes and pianos of "Celebration". Otherwise, the album is almost fully composed of slower, numbing elegies that counterbalance the low end of the vocals with the heavily-effected guitar tone: from the truly trawling "So Clean, So Empty" and "Rain" to the more pick-me-up overtures of "Esoptron" and "Succubus Priestess", both of which erupt into straightforward but forgettable charges at their cores. In my opinion, the 9 minute closer "Narcissism" is the true highlight of the album, foreshadowing some of the brilliant melodic elements that would follow on the epic Ophidian Wheel. Despite its bulk, the mix of whispered and brutal vocals and the dynamic variation woven throughout create a more fulfilling encounter than any of the shorter pieces. Though the elegant "Ice Castle" and "Burning Phoenix" come pretty close in terms of quality.

I can't say that the album had the same, stunning effect on me as Mystic Places of Dawn, but it tries, and if it suffers anywhere that would be the production and the lagging behind of some of the guitar notation. It seems that whenever the band aren't coursing through one of their huge melodies, the songs seem to just sulk about, threatening to cast the shadows of ennui in place of their typical, effective sorrow. Part of this is just that the guitar levels feel a bit uneven with the tinny drums, and often blend too closely into the keyboards. Mystic Places was hardly a bastion of production standards itself, but I felt like that album had a sadder, more disturbing effect on me, while this often seems too strangely enthusiastic about its doom and gloom. However, it's still well worth hearing, functioning on many of the same strengths, from its atmosphere to its lyrical fortitude, and captures a lot of that early to mid 90s appeal that many of today's younger initiates fail to reproduce with their monotonous vocals and drowning reverb.