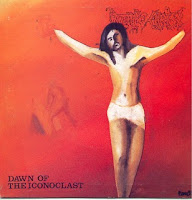 If you've heard Rotting Christ's 1989 demo Satanas Tedeum, in which the band were first beginning to explore the raw black metal roots that would lead them further into a unique epiphany throughout the 90s, then you'll will know what to expect from their 7" release Dawn of the Iconoclast. Primarily because "The Nereid of Esgalduin" was also present there, but also just the sound in general of both songs, which is incredibly crude and spring-loaded, black thrash stuff with some glints of atmospheric foreshadowing through the keyboard in "The Nereid". Of course, they were originally a death/grind outfit, but it doesn't quite reflect in the composition here, as they go for more of a straight, energetic thrash with diabolic vocal slathering.

"The Nereid of Esgalduin" is a minor classic itself, granted. Not because of the riffs, which are fairly average, because of the grimy atmosphere they create and the contrast in the bridge as the synth line manifests. Keyboards in extreme metal were not necessarily news (Nocturnus and a few other bands had already arrived at that conclusion), but here they take a largely forgettable piece and transcend it into nostalgia, though I also like the closing charge which reminds me of something Metallica would have written for Master of Puppets or Ride the Lightning. The B-side is "Vicious Joy and Black Delight", with a stronger, springy guitar and overall stronger riffs than "The Nereid", and a pretty majestic breakdown bridge with flowing, mid-paced guitars that are yet another precursor to the style they'd start developing on Thy Might Contract. The simple but descending melodies that arrive after the 3 minute mark are also pretty nice.

In conjunction, the primal mix and the songs create a carnal killing spree down memory lane, one of which ranks among the best metal tributes in history to a female, man-consuming mythic creation from the Greek past. If you're expecting anything more than a crass demo level mix, guess again, but it does nothing to hinder the charm of the composition, with a sufficiently dark and brooding malevolence throughout. Granted, it's over in 8 minutes, "The Nereid" is available elsewhere, and the scarcity of the 7" makes its physical format ripe only for collectors, but the songs alone are authentic and grim enough to please the aesthete of archaic extremity.