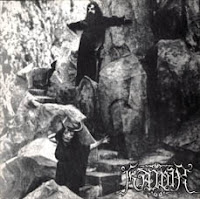 Kawir have long been an exciting prospect for me, because of all the core Hellenic black metal outfits, it is they who best embody the traditional history and mythology of their land through the lyrical concepts they employ. Yes, others like Rotting Christ may dabble in their national past for brief spells, but they seemed to expand their subject matter to a broader, occult spectrum. With the Eumenides EP, named for the Greek deities of vengeance (aka Erinyes), Kawir introduced themselves unto the underground, the first of several sadly overlooked recordings that, while not exactly breathtaking or mindblowing, might have seen a broader appeal based on their concepts alone...

This is your pretty standard Greek black metal for the time, with clear parallels drawn towards the works of Varathron or Rotting Christ (His Majesty at the Swamp, Non Serviam). The EP poses an interesting internal contrast, for while "The Adored Cry of Olympus" swoons along with sampled flutes, eerie synthesizers, plodding bass, and sailing, sorrow-spun guitar melodies among the crushing vocal rasp; "Eumenides" itself is a faster, grandiose piece with thicker guitar lines cast in a belligerent propulsion. The band still incorporates grim keyboard atmospheres into the latter, and they're admittedly creepy, but they sound far more potent and poignant when they're raging like the great bitch Hera when she discovers her mate Zeus lying with another mortal sucker! Thus, the title track is my favorite of the two here, but that's not to say that the chill and solemn "Olympus" need be ignored, only that the two feel a little jilted in conjunction, and it might have been a better idea to run with two of the more intense tracks.

Eumenides does sound rather rough, with its fuzzier guitars and slightly uneven mix, but just about everything from Greece at the time was in the same boat, so at least they get credit for overcoming this with half-decent compositions. Unfortunately, this has got to be one of the most overlooked bands in the entire scene, and they remain so even after almost two decades of their exquisite heathendom. Where bands like Rotting Christ and Septic Flesh were thrust into the spotlight, and even Varathron and Necromantia gained a noteworthy cult following, Kawir seem to have idled in the dust. They might not have ever released anything on the level of those that I just name-dropped, but they certainly deserve some attention, for exploring not only their cultural roots, but in such an efficient hybrid of the grim and eloquent.