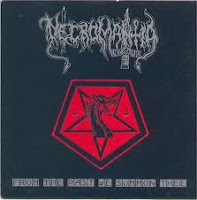 From the Past We Summon Thee is all too appropriate a title for this EP, since Necromantia decided to dredge up a brief, charming live studio performance from 1989 on their unsuspecting, devoted fans. As you would expect, the performance here relies heavily on the bass, drums and vocals, and its rather an interesting experience, if all too short. I was surprised at just how good the band sounded...there are live recordings coming out today with less clarity, but if a few gripes could be made, it would be that the vocals are too loud compared to the instruments. Now, I love the vocals, and their diabolic slather, which is driven to extremes here through the reverb, but they do create a slight imbalance.

Otherwise, this is pretty ace. You could think of it more as a group of friends getting together for a creepy poetry slam session, the poetry being their grimy bass-driven filth, than a proper live gig. You won't hear an audience erupting in between the songs here, each of which is great, but there are only three, and the sum of the recording is only about 10 minutes. All of them hail were given a studio recording the year after on their 1990 promo, and then again on the Vampiric Rituals demo, yet From the Past We Summon Thee might actually be the preferred version. In particular for the eerie, spoken word meets horror noise meets bass flurry of "La Mort", and the sluggish, Celtic Frost-like crawl of "Lycanthropia (Lycaon's Metamorphosis)". "Faceless Gods" is the most 'serious' seeming of the trio, with a lot of distortion on the bass to give it a ribald, charging appeal.

Basically, imagine a circle of hippies getting together on your campus lawn for a drum session. Run them over with one of those industrial strength riding mowers, and replace them with folks who are actually cool, like Magus Wampyr Daoloth. Give them some microphones, bass and an amp and see what sort of ritual haze they invoke, minus the symphonic elements they use on their albums. That's From the Past We Summon Thee in a nutshell, and despite its brevity, it's one of the better live recordings from the Greek scene, even if its not your proper rock star live situation. That said, I wouldn't dub it essential, because it only leaves the listener craving more...a lust that can be sated only with repeated listens of Crossing the Fiery Path or the epic Scarlet Evil Witching Black.