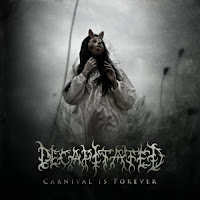 Upon viewing its Slipknot-like cover image and hearing a reel of audio samples with no real highlights, I admit I was dreading a flop of Morbid Angel proportions from the 5th Decapitated record. The once Polish prodigy seems to have almost entirely abandoned the technical death metal roots that made them such an international force at such a stunning, young age with Winds of Creation. They've devolved into a creative wasteland of hyper djent and grooving death/thrash which, while not exactly effortless, seems more for the mall than the maelstrom of nuclear potential they once expressed. I understand the band here (outside of guitarist Vogg) is entirely new, and that the passing of drummer Vitek would have a profound effect on the others (he was fantastically talented). But if you had told me at the turn of the century that Decapitated would end up a hybrid of Meshuggah and Pantera, I would have given you the same astonished stare I give crazy people. Or ACORN employees.

Yeah, so "The Knife" features driving Meshuggah rhythms and vocals that fall somewhere between Max Cavalera and Phil Anselmo, and while I don't always have a problem with the style, the verses had me on the edge of shouting 'Fuckinnng hostttiilleee!' at my neighbors. The tune is snappy, aggressive and has a mechanical sheen to it, created through the vocal samples hanging at the edge of perception in its bowels; it even has a half-decent lead from Vogg. But within 30 seconds, I had to struggle just to remember a damn thing about it, and sadly, the album just does not get much better beyond that. The energy through "United" and "404" is unbridled, sure, but these are nothing more than streams of power chugged mutes played at faster than average speed with bouncing bass lines and mechanized grooves woven through. Not a single riff on this entire album carries the same perfection as "The First Damned", "Way to Salvation" or "Blessed" from the debut album, and its industrialized undercurrent is even less appealing than its predecessor Organic Hallucinosis.

In fact, the album is such a spastic dullard that whenever Decapitated veers away from their staple aggression, like the clean guitars that inaugurate "A View from a Hole" or the brooding bass deep in the title track, or even the bland acoustic finale "Silence", I actually welcomed the shift in perspective. Carnival is Forever is an experiment in contrasts with nothing experimental about it...a safety net of belligerent impulse threaded with un-subtle segues that create only an illusion of emotional depth. This is the aural equivalent of throwing a rage at your Mom if she failed to drop you off at the hockey meet at the proper time, or your girlfriend when she dumps you for being an angry, volatile ass. It's not without its implicit skill-set...after all, this is Vogg, a frighteningly talented guitar player who seems to have forgotten his own potential, and it's not quite the vortex of ill-bred ideas that Illud Divinum Insanus was, but this is the first major disappointment I've ever felt from the Poles. Deflated death metal starlets. What could be more depressing? All I could think of as I listened through this a third and fourth time to compose my thoughts was: thank the heavens below that Vader would never pull something like this.