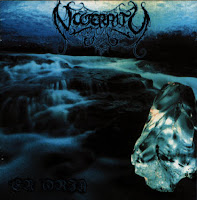 The fantasy fanatic in me has to admire any band formed by a man who takes his stage name from a George R.R. Martin novel, and that is precisely what 'Khal Drogo' of Nocternity had done, long before the HBO Game of Thrones was televised into the living rooms of every bandwagon ignoramus who never had the patience to read the marvelous novels. In return, I find myself with the patience to listen through every recording this Greek project has released, which do admittedly vary greatly in quality. En Oria was the premiere full length and statement from the act, and perhaps the least interesting, but not without a number of noted strengths that would lie the roots for the stronger works Onyx and A Fallen Unicorn.

Nocternity does not much resemble those Greek contemporaries who placed the nation on the black metal grid, but instead takes its queues from the Norse and Swedish composers, its grim and grisly aesthetic placing it somewhere between Burzum and Bathory. The atmosphere of this album is very damp and dark, with Drogo's thick and simple guitars streaming an ichor of sadness alongside the drawn out, deeper snarling of the vocals. Tempos vary from the glorious, simple patterns of open chords used to transmit fist-raising exhilaration to the listener , to the straight nihilistic blasting we expect of the genre, but all of it sounds appropriately oblique, as if the riffs themselves take succor from the very shadows. That said, they aren't all that great, and often the songs will shift around through various schematics of dull and predictable notation, as is the case for "To the Shrine", "Enter the Rift of Chaos", or "En Oria" itself, none of which produce a single guitar riff that concerns me whatsoever (though the atmospheric interlude in the title track is acceptable).

But then, several are stronger in composition, like "The Drowning", which sets each new stage into emptiness up lavishly, with a mire of atmospheric organs forming an extensive bridge. Or "Queen of the Damned", in which a desperate surge of layered melodies again builds into another swath of open, eerie space. The keyboard passages that bookend the CD ("Night Omen", "Aura") are also rich and swelling despite the minimalism of their construction. I'm a sucker for a good synthesizer and these were absorbing enough that I actually found myself disappointed there weren't more throughout the track list. The production is dim and evocative without losing its clarity and focus, but ultimately the quality of the writing varies too much to give this a glaring recommendation, or really any at all. Half of the content is alluring and engrossing, and the other half rather too forgettable. Nocternity had not yet conceived its 'stallion to mount the world' here, but as it turns out, this would be a band to hone ears upon, who would move on to greater achievements in the near future.

However, I would like to point out that the concept behind this debut, which seems to wholly focus around an undersea goddess ('Umberlee' is mentioned, an evil ocean deity from the D&D setting Forgotten Realms) and the despair of sailors and seamen throw about and sunk below the tides, is pretty fucking cool, as are the lyrics written to explore it.