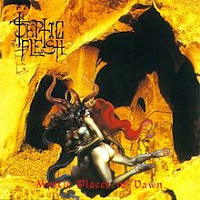 Having already established themselves as one of the most unique and refreshing new faces in European death metal with their Temple of the Lost Race EP, the years were only going to be kind to Septic Flesh, not to mention their listeners. Mystic Places of Dawn was an astounding debut which easily surpassed that 1991 release in both scope and quality, a solemn excursion into places mythological and fantastic, an atmospheric descent of death and doom freckled by the glint of brighter synthesizers, lyrical evocations of the ancient and historical, and the drawling guttural brutality of Spiros Antoniou. It would be a fair comparison to measure this album up against the formative works of the higher profile death/doom hybrids coming out of England (Paradise Lost, My Dying Bride, Anathema, etc). The Greeks are not always labeled as such, but Mystic Places of Dawn paints the same, downward slope to sorrow with an even broader, atmospheric brush.

This album is a monster of melancholy, and while it hovers at around 55 minutes, a substantial duration for death metal in its day, I highly recommend listening all at once, for the ebb and flow of the material seems almost too much to contain in just a fraction of its sum composition. The process here usually involves simplistic, driving or dredging guitar lines sauced in a cheesy but ever memorable topping of tinny synthesizers, and the haunting lamentations of guitar melodies filtered through the perfect level of reverb and effect. Don't be mistaken to think this is always being performed at a crawl, because a number of tunes like "Return to Carthage" or the title track thunder along with the same velocity of their death metal peers. However, it's a general rule that the band will segue into some eloquent, doom dripping passage at some point, even in the faster fare, so there is no reason to fear some dearth of variation.

Certain tracks are admittedly 'prettier' than others, like the dreamy sequences of synthesizer bliss that adorn "The Underwater Garden", or the pure synthesizer finale of "Mythos - Part I: Elegy" and "Part II: Time Unbounded", but Septic Flesh were one of the better bands to incorporate keyboards into the genre, alongside Finland's Amorphis, who also put out a rather stunning effort in the same year (the phenomenal Tales from the Thousand Lakes). That album had far better production than Mystic Places of Dawn, but the actual contrasts of melody and brutality are quite similar, taking into account the varied cultural subtext beneath the writing. This isn't quite so regal and glorious, mind you, but there is a far stronger sense of sadness suffused over the material. The listener gets a real feeling of ages creeping past, of civilizations risen and then fallen, as if one were to watch the gradual settling of Atlantis to the floor of the ocean, forgotten by all but legends...

As I hinted there, the actual mix of the debut is a bit lacking, not so much that it hinders the clarity of the music or the ultimate enjoyment of its contents, but just enough to give a slight air of amateurism. In fact, Temple of the Lost Race sounds to me superior, even if the actual songs are not. That said, its weighty and moody enough to appreciate despite this mild setback, and its in fine company with other Greek masterworks like Scarlet Evil Witching Black or Thy Mighty Contract, both of which have production values that many would scoff at. Actually, a better parallel would be drawn to the Nightfall sophomore, Macabre Sunsets, but that's chunkier and more annoying than Mystic Places. All told, though, the songwriting is consistently impressive, and Septic Flesh amply proved their importance as one of the finer atmospheric death metal acts the world over. To think that this isn't even their best...