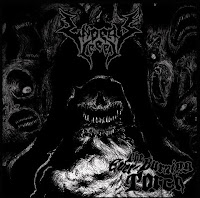 Amazingly, the classification 'Swedish' death metal seems no longer to apply exclusively to those practitioners of actual Swedish lineage. Elsewhere in Europe (and beyond), there is a growing tide of clones and aspirants who have apprehended the traditional burst of the scene's guitar tones and then applied their own, meager variations to the medium. Some are exonerated by stronger songwriting which appropriately mirrors the gloomy, potent aesthetics of Left Hand Path, In the Embrace of Evil, Like an Everflowing Stream, Dark Recollections and so forth, and some are simply pissing in the wind. The Ever-Burning Torch is thankfully a card carrier of the former category, and its Italian inventors, Undead Creep are strong enough to rival the 3rd and 4th generation Swedish acts in the field, but it only vaguely succeeds due to a handful of strong and haunting hymns that heave it over the lip of oblivion.

The foremost of these is the opener "Immolated in Reincarnation", which hearkens directly back to the sepulchral force of Entombed and Dismember in the early 90s. Surges of vibrant evil are manifest through the predictable pace and drumming, but the track really delivers when it cedes into its eerie, late bridge which would have felt right at home on Left Hand Path. So they know how to kick off an album, and then hold your attention for a couple more tracks, like the grooving and thrashing of "God's Disdain", the further acceleration of "Surrounded by Tombs", and finally the damp, doom of "Eternal Rest" that later busts out into this superb thrashing lead bridge. After that point, the album seems to dissolve, not in consistency but quality. Further into the play list, the tunes just seem to retread the previously established rhythms and descend into forgetfulness, even if there is an occasional standout riff or two.

The Ever-Burning Torch (possibly named for the thrifty D&D item?) is not hurt by its ominous, dark production standards, which effectively channel the cavernous miasma of past works, and the vocals of Sandro Casu further officiate its authenticity, though they too unabashedly draw their inspiration from the usual suspects. Undead Creep have included their s/t demo from 2009 as a bonus, and the sound there is only slightly rougher in execution, so there is an appreciable value to such completeness. But it's been done, folks, and done nearly to death by this point, so if you're not fresh to the post-Swedish sounds or you're sick of the style's redundancy, you will likely wish to steer clear of these Italians. If you're down for more of that same aesthetic, and fond of how non-Swedes (like Czechs Brutally Deceased) interpret that much lauded period at the dawn of the 90s, then have at this debut.