Falls of Rauros - The Light That Dwells in Rotten Wood (2011) 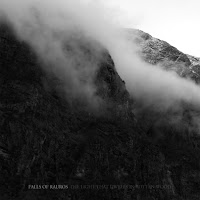 Bindrune Recordings has become the de facto imprint for rustic and largely original sounds within the black and doom metal spectrums, from the more minimal and ritual (Blood of the Black Owl), to the Midwestern dalliances of Shroud of Despondency or Obsequiae; even spanning the ocean to the glorious traditional charge of British Wodensthrone. Falls of Rauros would not be the first time the label has visited the backwoods of New England, having released the full-length debut of New Hampshire's Cold Northern Vengeance a few years back. But they now expand this Northeastern grasp to the temperate mountains and forestry of beautiful Maine, with The Light That Dwells in Rotten Wood, an effort appropriately nurtured into the North Appalachian climate and wilderness.

As this is a folk/black metal hybrid, acoustics play an important role, and to be truthful they also provide some of my favorite moments on the album. Brooding, lower ranged patterns are spiced up with sullen ambiance of the "Nonesuch River Chant" or the tempered grace of closer "The Cormorants Shiver on their Rocks", but they're also interspersed with longer pieces "Awaiting the Fire or Flood that Awakes It" or the primal river-flow of "Silence". These are fused with a powerfully produced wall of polished distortion and sailing, sorrowborn melodies that are at heart simple, but effective enough for the emotional needs of the listener; and a long, drawn vocal snarl that focuses on the quality of its internal pains rather than a quantity of syllabic throughput. The two centerpieces ("Banished", "Awaiting the Fire or Flood...") do suffer from a sense of bloat, but they're coherent enough and sequenced through enough mild shifts in tempo that one never becomes exceedingly bored when listening.

The album also sounds enormous, not hidden in the caverns or hollows of the landscape like a recluse, but straight in your face like a rush of autumn winds beating at the tree-line. There are numerous periods of errant despair contrasted with passionate swells, almost as if this record were an arboreal tide, a gray and green lattice of the Earth's sadness, wept out through the centuries of blood and loss. That said, I can't say that the metallic tracks here were exceedingly memorable or immersive enough that I'd continue to return to the album's coniferous eaves. I rather enjoyed the acoustics more than the distorted riffs, and though the vocals pulled their weight of lamentation, I felt that the writing (especially the longer tracks) was predictable and passable in spots. Nonetheless, this is still a decent record, obvious effort was expended in its creation, and fans of the Bindrune roster or the territorially opposite Cascadian black metal scene will find something rich and familiar here.