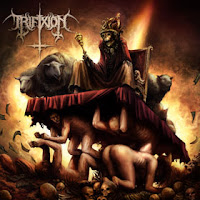 If the criticism of an album were merely upheld to a checklist of rights and wrongs, then A Utopia for the Damned would be fully and resoundingly a success, because England's Trifixion have a lot of weaponry at their disposable. Tight and professional musicianship. A striking balance of manifold brutality and melodic deviations from its pummeling core. Dynamic versatility. An effective, harrowing setup ("The Human Construct" intro). An amusing and memorable album cover. Eye-catching song titles ("Fucked in Guttural Vortex", "Whore Goddess", "Showered in Glass in a World of Shit"). But most of all, they've got the production capacity equivocal to bands decades their senior: A Utopia for the Damned is as modern and potent as you're going to hear from the field of brutal death metal in the year 2011.

So why am I not bending over backwards and sideways for this album? Because, for all of their tools, all of their polish and all of the obvious effort implicit in recording and performing the material on this debut album, Trifixion have only managed to produce just another competent brutal death metal record. Its alternating frequencies of forceful slam and massive velocity are simply not unraveled through intensely memorable songwriting, though all of the fundamental ingredients are well in position. They've got all of the appropriate influences, from Suffocation and Cryptopsy to Deicide and Cannibal Corpse, but what I'm hearing is more of a parallel to the modern sounds of California coming from Severed Savior, Deeds of Flesh, Pathology or Inherit Disease: entirely capable of caving your skull in, but too endowed with filler riffing that attempts to pass on the brickhouse belligerence of its tone alone.

Just listen to the intro sequence of "Freedom of the Maladjusted", a moody and practiced strait of subdued, eerie tapping and depression inducing melodies which segues into a wonderful piano part before being eclipsed by the standard brutality. This moment or so assures me that Trifixion, when they're 'on', can write some damn effective music. You'll hear this throughout the album, in small pieces of the bridges between verses, or surrounding the admittedly well written leads, yet its clearly in the minority, and when they get heavier, they really fail to find a voice for themselves among such a massive crowd of hopefuls and veterans. I wouldn't fuck with these gentlemen at a pub, mind you, because they've clearly got the muscle required of this genre. But so much of this debut thirsts for superior notation that it becomes difficult to recall even a faint few moments after the smoke clears and the cannons fall mute. The potential is insane here, but the music treads a too-commonly trampled path.