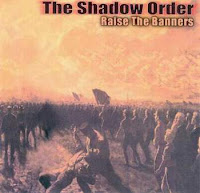 Similar to Legion of Doom or Darkthule (the latter of which has shared several of the lineup in the past), The Shadow Order stands among the more nationalistic acts, politically and historically, to rise out of the Greek scene. But more importantly, their debut Raise the Banners exists as further evidence that the deeper the roll of years, the less that the newly manifest Hellenic bands of the late 90s or 21st century were bearing the musical distinction that their forebears imparted years earlier. For, though it's not at all a bad album, Raise the Banners sounds like it might have arrived from just about bedroom act anywhere in Europe, or beyond, with a decidedly Burzum aesthetic in the guitar tone and composition.

It's also an album which takes a few tracks to really develop, as the meandering, raw "Raise the Banners" itself and the faster but futile and predictable "When the Day Comes" are nowhere near the strongest compositions. In fact, they're hardly any impetus to keep listening. Like a lot of NS black releases, it's low on the production totem, with a rather regrettable drum machine that is consistently its biggest drawback. The guitars are fuzzy and tearing, though, and the vox have a harsh resonance to them which I enjoyed, and once the first 7-8 minutes of the debut have cleared, it becomes more effective with the bleeding, airy streams of "Strife for Revenge", the storming, chunky and overpowering "End of Journey" and even the epic, cheesy ambient synthesizer piece "Viktoria Divina" which somehow fails to wear out its welcome after almost 8 minutes of lo-fi droning!

The real gems are tucked into the latter segment of the album, "Blood and Honour" and "War Against All", which both feature some strident, cutting mid-paced riffing redolent of Det Som Engang Var or Transilvanian Hunger. These were originally found on their '98 promo, and if you've got the later CD release of this, there are also a pair of bonus tracks in "The Oath...", a martial ambient piece that erupts into filthy black metal, and another ambient piece, "Faith is Stronger than Fire", with some thundering percussion beneath. Both are solid additions to what is largely a tight and terrifying debut. The production is obviously pretty amateur, and the drum programming a sore thumb that would have been soothed with an actual live skin basher, but we all know that this is just not an option for many underground musicians. In the end, Raise the Banners takes a little too long to really make an impact, but I've heard a lot fucking worse, and there are some good guitar melodies strewn about its savagery.