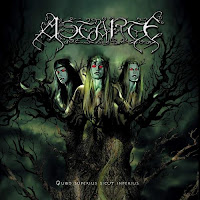 While it doesn't exactly break the mold established by the prior two Astarte albums, Quod Superius Sicut Inferius exhibited a superior songwriting effort. More versatile and arguably more accessible, there is a depth to the tracks here which was lacking in the colder compositional focus of its precursors, but the fundamental style of melodic black metal is still intact, as was the eye rolling vanity of once again including the ladies in the cover image, this time as a trio of dryad-like beings morphed into a gnarled tree. I still hear traces of Dissection and Immortal in their style, but much of the slower fare here could certainly be estimable to countrymen Varathron or Rotting Christ, so as its verdant face would imply, this was to its day the most 'Greek' of the Astarte releases.

"Reign Unfold" is a pretty close approximation of the previous albums, a glaring charge into the straits of desperation and loss, but immediately forgettable once the clean guitars and pianos of "Inflamed Paradox" roll out a more appreciable, atmospheric procession of archaic delights. I enjoy the faint tints of melody once the black metal chords roll out, and the choirs manifesting in the warlike bridge. Other strong moments include the steady, 8+ minute march of "Oblivious Darkness" with its folk-like melodies woven throughout, the angelic aggression of "Deep Down the Cosmos", and the potent elegance of "In Velvet Slumber". A few of the faster tracks play it safely to the band's roots ("Incarnate Legend of Mummy Queen", and the title track), but I quite prefer it where the band pace themselves at a medium gate and really let the guitars shine. That said, this is unnecessarily long effort, 66 minutes in total, and almost all the songs are substantial at 6-9 minutes in length, most of which could use 30-60 seconds of trim at the least.

The vocals are also pretty bland. Granted, we didn't have a wealth of female fronted black metal bands at the time (we still do not), so I'm sure Astarte weren't attempting to rock the boat all that much, but Tristessa just sounds like any other middle of the road European black metal rasper. The seeming gender neutrality just doesn't work in favor of this music. Where is all the witching potential? The screeching? The gorgon incantations? I would not at all mind if these Greeks flaunted their femininity just a little more in the music itself (we know they will on the covers). Hell, King Diamond is more effeminate than this. Quod Superius Sicut Inferius was surely the product of much effort. Considerable time was spent writing the compositions, and it was instrumentally and stylistically their best album to date. The production values are just as strong, if not stronger, than the first two records, but the triumvirate of sirens still lacked the distinctive characteristics to separate them from the lion's share of accessible European black metal acts. Could use a little more Circe and a little less Hades.