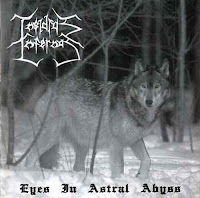 Without going all Gothic and trendy, Insidius Infernus attempted to incorporate ethereal female vocals into a scathing blackened metal construct which was otherwise well in line with the majority of the European scene in the mid through late 90s. Quite Norwegian, in fact, as if a band like The Sins of Thy Beloved or Theater of Tragedy had decided to play straight black like Emperor or Mayhem. That said, the mildly gnawing novelty of this approach was not enough to lift Pale Grieving Moon out of the middling and mediocre range of faceless, redundant albums. It's successor, and the band's swansong, Eyes in Astral Abyss, is characterized by a greater level of variation of its content, but is ultimately unsuccessful in surpassing the framework staged by its predecessor.

This is raw, even cruder than the debut, and features a lot of rocking mid-paced black metal riffs in the vein of Darkthrone or Celtic Frost/Hellhammer . Every now and then, as in "Dawn of Bloodbath" or "Enter the Perennial Solitude", I found myself nodding along to some authentic and grimy feeling compositions that at least got the whole cult, lo-fi aspect correct. Yet they just don't hold up to multiple exposures, and in the end, even the more brazen and glorious penned rhythms of "Walk Through Nightshade Valleys" or "Children of the Night" leave much to be desired. The female vocalist, Luciferia, seems to take a less prevalent role this time out. Her lilted, angelic presence is still a factor, but it seems to thread in and out of each track without the same solidarity it had before. I'll maintain that she's got a decent, shrill voice, and might not be unwelcome over some more folksy or ambient tunes in the vein of The 3rd and the Mortal, but it doesn't add an appreciable dimension to this music like the band might have hoped.

Nothing here is really all that bad. The lyrics do their best to evoke the typical imagery of nature and mortality, and the riffs keep at it throughout, even if they're never original sounding or able to stick to the listener's cerebral nodes once they pass. If black metal had gone mainstream and viral to the point that it infiltrated pop culture completely, and you had 'black metal' coffee houses springing up for hipsters and hippies everywhere, I feel like Eyes in Astral Abyss would be a qualified soundtrack for a cappuccino of darkness. Maybe on open mic night, some corpse painted couple would jam out to their evil spirits' content. Otherwise, this is quite vapid, and hangs about the memory with the most vaporous of persistence. The awful cover, which looks like one of those wolf tees you'd pick up at the smoke shop in he local mall, doesn't help matters much, and it doesn't quite hit even the mark set by the prior effort.

Posted by autothrall at 6:36 AM