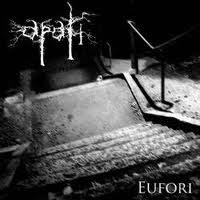 It never ceases to amaze me how a million and one bands out there can directly emulate a staple like Incantation, Mercyful Fate, or Hellhammer, either aesthetically or note-for-note, and receive nothing but the most copious fellatio, while a band bearing any similarity or direct influence from a more contemporary artist is immediately cast to the rapids with no lifeline. Praise be to the inter-trolls and their consistent criteria. This fate seems to be the case consigned to the Swedish Apati, who have the misfortune of drawing an inescapable comparison to their countrymen Lifelover, or to be more specific, their first two albums (Pulver and Erotik). Or, to be truthful, perhaps I should point out the similarities to another Swedish band, Katatonia, whose driving monochromatic gray-walls of depressive melody clearly formed a foundation from which both of these acts (and many others) have built.

Now, I'm the first person that would mourn a band's lack of innovation, which is not mutually exclusive with the quality of songwriting, but at the end of the day, good music is good music, and Eufori happens to contain an enjoyable supply of such. As one who does appreciate much of the material from those 'other' Swedish names dropped above, it would be remiss of me to neglect the fact that the vocal variation and chord patterns here do conjure a parallel. However, Apati work incredibly well within these parameters, transporting the listener to an emotional precipice and then relinquishing him or her over the edge. Patient C's instrumentation, which is decidedly less bleak than his other projects (Svart, Livsnekad, etc), provides a somber escape into the dichotomy of life and death, passion and pain, sobriety and substance abuse. Simple, repetitive chord lines are cast out like nets to hook the audience while the vocals delight in both resonant torture and sincere agony.

To an extent, the band is experimental: they incorporate samples in Swedish, write their lyrics in Swedish (you can get an English translation at their website), and engage in non-metal compositions like the drifting, dreary guitar instrumental title track, or the static, numbing pianos of "Nyker Idag". But the heart of this debut is clearly worn on its overcast, melodic black metal sleeves. "Höst", "Likgiltighetens Slutstation" and "Livet Ur en Dåres Synvinkel" are all expansive, beautiful, drifting works which reel and release only a small selection of riffs into an effective whole, but the centerpiece of this album has GOT to be "Sömnlösa Nätter", with a guitar sequence so emotional that I can listen to it for hours on end and never stop feeling sad. Mid-paced tremolo riffing surges above the concrete machinations of the drums with a tidal flow, while a higher pitched melody gleams off the top, and the spine of backing chords lends support to the pain-stoked vocal presence of Fredrik Wolff (aka Obehag).

That particular song is simply phenomenal, and while others come close ("Allt Jag Aldrig Haft" is indeed mighty), it's a must listen for fans of Lifelover, Coldworld, Shining and so forth. But I maintain that most of the elements here are inspiring, from the piano segues to the cleaner guitar passages, and even the most stoic, doom-like trials of "Blodrött Hav". The production is firm and raw, but each constituent instrument is appropriately downtrodden, like a cold and inevitable precipitation that won't let up for over 50 minutes. Eufori definitely transcends the mere medium of musical expression into the realm of 'experience', and even if this is a path that others have traveled (and continue to travel), Apati's footprints are not unwelcome. It isn't at all perfect, but then, neither is life. Neither is drawing breath. So why not drown for awhile?

Posted by autothrall at 6:25 AM