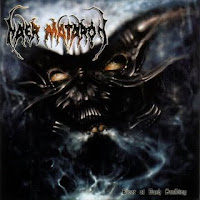 Cosmetically, just about everything surrounding the third Naer Mataron full-length seems like it will rip the listener's face off. The cover art is incredible, the triumphant pro-European lyrics offer some unbridled excitement, and the title itself is memorable. Not only that, but the tonal, dark ambient lead-in "As the Clouds of War Gather" really builds up excitement as the percussion erupts into its ominous assembly of swelling sound. However, as soon as the blazing riff-stream arrives to deliver the awaited contrast, the album seems to step straight off the pedestal of potential and into the category of average, scathing European black metal with little to distinguish itself from the hordes of bands from Sweden and Norwegian that had long since made this niche their bitch throughout the prior decade.

Emperor, Mayhem, Marduk, Immortal, Dark Funeral. You could list these and a dozen more, and struggle to discover just how River at Dash Scalding differentiates itself. There is no doubt that these Greeks have a surplus of electric energy, but they apply it to a series of assault riffs that rarely, if ever generate memorable notation, and a rasping style that is all too typical for its day. "The Continuity of Land and Blood" is admirably brief, but in its three minutes of high impact aggression, not a single distinctive riff is evoked. But worse are the longer songs, like "The Great Meridian Tide" or "Salvatores Dei" which hover around the 9 minute mark. The twists and turns that one would expect in such a swollen composition are sadly few and far between. Where they do arrive (like the sailing melodies in "The Great Meridian Tide"), one breathes a sigh of relief, not that these are exceptional segues, but that the very notion of creativity has not evaded these Hellenic barbarians altogether.

Perhaps the only songs I actually did not lose interest in (aside from the intro) were "Ancestor Worship" with its banging concussive substrate and narrative along its wall of guitar noise, or "The Plunderer" with its bleeding, effective guitars and decent bass-lines brooding below. But the latter does devolved into a pretty bland riff in between the opening and bridge. Really, the best I can say for the album is that it's more of the same, tireless blasted black metal that some fans of the genre never seem to tire of. But where something like In the Nightside Eclipse or Pure Holocaust succeeds by way of atmosphere or ripping innovation for its era, River at Dash Scalding comes across as a mere derivation of form. Along with the short-lived Mournblade, Naer Mataron represents the closest that Greek bands would come to that sound, and if you thrill at the thought of it, then by all means, give them a listen. There's nothing necessarily bad about the record (or anything Naer Mataron has ever released), but I had hoped for a lot more.

Posted by autothrall at 6:43 AM