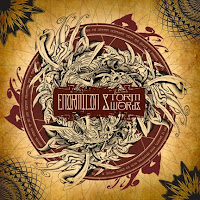 It's hard not to see the words 'Storm of Swords' and not think upon the George R.R. Martin novel from A Song of Fire and Ice, so of course I thought the Texan band Enormicon's debut might revolve around the subject. Turns out not to be the case, but they do in fact seem to use mythic and historical concepts in the lyrics, not unlike the bands they bear much in common with. I was pretty heavily reminded of listening to Mastodon, at least in the level of variation they write with, but you'll hear all sorts of sludge, grunge and stoner influences here being shuffled into a manic, hardcore foundation with multiple, angst-ridden vocals. However, while the band feels as if their material might be prone to jamming in the live setting, the contents of this album are quite solidly structured.

Thick, flowing bass lines, chords and mutes are used to anchor the omnipresent grooves of "Slaghammer", slowly building towards climax, almost as if The Sword had written the Alice in Chains sophomore Dirt. Here you get the first taste of Clayton 'The Abomination' Davis' cutting, clear vocals, which are redolent to some of the higher pitched Clutch lines. The next few tunes are a bit heavier on the guitars, but they also introduce small flights of dissonant atmosphere, even a bass interlude in "Pray for Death". "Brotherhood of the Plague" is perhaps the strongest here, for the way the organic, earthen distortion crunches up against the vocal pattern, and a spacious bridge passage with hints at hypnotic psychedelia. Another subtle influence I'm hearing would be Voivod, at last in the mechanical manufacture of the chord patterns and the strong substrate of bass in tracks like the closer "Fury". But the lyrics and themes are wildly different.

I'll give Enormicon this: they manage to stand out as an amusing hybrid of their influences, and with some polish and stronger riff writing, they could have something going for themselves. I actually do like the vocals, I only wish they were configured into more memorable patterns. The constant pump and grooves creates a constant, steady weight and velocity, and I like that the band are prone to experimentation rather than droning ever on in the same stagnant patterns. The trio plays well together, and the mix is rather honest and under-produced to give a more rehearsal room feeling to the proceedings. I like their eye for art, and their ears for attempting something slightly outside the envelope of safety, but this particular 32 minute set of songs just didn't last for me in the end. If you're of the sort that enjoys a fusion of stoner and grunge aesthetics with post-hardcore pacing and occasional fits of gut-churning intensity, give it a spin.

Posted by autothrall at 7:00 AM