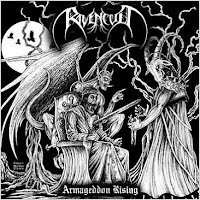 The seasons might shift, the years roll on into the endtimes, but the lion's share of black metal musicians have expressed little to no desire to change with them. Thus, I present to you Ravencult, another band of European loyalists to the precepts carved in flesh by the Scandinavian first and second waves (Bathory, Darkthrone, Burzum, Immortal, and Mayhem all come to mind). If one thing could be said for their Armageddon Rising EP, it would not be that any status quo were being challenged, or boundary being forced, but that the Greeks spend about 10 minutes giving it their all, with riffs that whore for evil majesty more so than a number of their myriad contemporaries.

The tracks here are stock black metal, indeed, but they are at least distinct from one another. "Dethrone the Son of God" (no relation to the Havohej album/track) is faster paced, its blood streaming guitars carrying a melodic texture that functions suitably alongside the blustering, tortured throat of the frontman, yet aside from that one central riff in the verses, there is next to nothing interesting happening whatsoever. Traditional for the genre, with decent production and a steady blast beat, striving for no more. "The Nightsky Codex" is slower, reminding me of the careen, crashing walls of discord that once dominated bands like Emperor, Satyricon, Enslaved and Immortal in their formative years, with perhaps a sliver of Viking-like pomp to the composition, but once again: you get this one, big riff which you can take or leave, and then nothing else of interest manifests throughout it's nearly 6 minutes of existence...

So, really, one must just do the personal math: do you want another straight black metal piece with average songwriting skill, black/white cover art, cool logo and no deviation from the norm? Then Ravencult is unlikely to disappoint. They get a good, clean tone going, without ever threatening an excess of polish. But if you've heard this a thousand times before, and trust me, most of us have, then I can't see much of a reason to recommend Armageddon Rising. The lyrics, titles, and concepts characterized here are quite redundant, though the band is nowhere near bad at all. My advice would be to skip this and dig into their later full-lengths, Temples of Torment and Morbid Blood, which are slightly grimier and more fun than this, if no more unique themselves.

Posted by autothrall at 8:06 AM