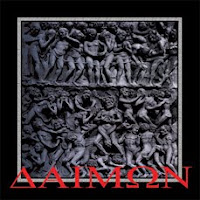 ΔΑΙΜΩΝ (retitled 'Daimon') is another of those split records meant more for its rarity and value to collectors than listeners, pairing up two of the more primal acts of the Athens underground who had in general maintained an incestuous relationship (members of Zemial appearing on Kawir releases, etc.) I'd say that the match is pretty natural, not only from the bands' friendship, but from a stylistic standpoint. While Kawir had been notably more pagan in their approach, Zemial was also a band who incorporated elements of atmosphere through their works, first with keyboards on Sleeping Under Tartarus but later writing up even a tribal instrumental piece for their Face of the Conqueror EP.

Unfortunately, while both bands bring their interpretation of a 'Daimon' track, that's all you will find here. Not even eight minutes of content. Zemial's 'Daimon (Morpheus)' is identical to the track on Face of the Conqueror, only marginally rougher and 'blacker' in its production here, but the same savage speed metal slathered in rasped, hostile vocals that you'd expect from them. As expected, the Kawir addition is more moody and atmospheric, granted a truly grimy guitar tone and very faint, crashing drums that make it sound more crushing and oppressive than their various albums and EPs to this point. The riffs are more or less a variation on the Zemial tune, and in truth both sound familiar and predictable to anyone who has been listening to black metal since the first wave and all the underground acts that have followed suit, but Kawir inserts a few segues of chanting, laughter and ominous ambiance that break up the meat of the guitars.

Again, this was released as a collectible 7", with about 1000 copies, so the intention was never to manifest anything other than an obscure product for their diehard audience. The musical content is not really of huge concern here, which is appropriate, since it's admittedly nothing special. Add to that the fact that the Zemial track sounds better elsewhere, and just about every possible compulsion to attain this is swept clear beneath the Parthenon into the waters of the Lethe. Both acts are better experienced elsewhere in their respective catalogs.

Posted by autothrall at 7:17 AM