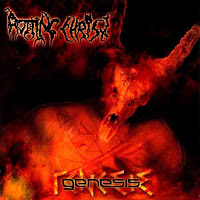 Not a band to take the international momentum they spawned in the 90s lightly, Rotting Christ have kept themselves busy with album after album throughout the first decade of the 21st century. With an almost remarkable solidarity, none of them have suffered in quality, so if Genesis is found lacking anything, it would simply be that the band are so damn consistent that some might consider it a turnoff. Merging elements of the past three albums (A Dead Poem, Sleep of the Angels and Khronos) into a fusion of Gothic, ritualistic world music and black metal, I'm not sure if the Greeks had ever sounded so immediate and accessible as on this record. Even if it's not one of their best, and a number of tracks stand a full head taller than others, I find it every shred as enjoyable as Khronos, if not marginally better...

They come out firing with a number of curious, faster paced pieces in which slight evolutions on old formulas are exacted, such as the rhythmic start/stop sequence that inaugurates "Daemons" with its tense tapping and shrill, operatic background; or "Lex Talionis" and its use of Gregorian chants beneath the bloodied, rasping surge of the battering guitars and vocals...with yet another of those tapping riffs rippling off below the percussive bridge passage. The chanting is used to an even greater effect on "Ad Noctis", one of the most emotionally stirring tracks on the album, with escalating charge rhythms tweaked on symphonic swells and a Gothic sprawl to its bridge. Of the slower pieces, the winding melodies and whispered poesy of "Dying" affixes itself directly to the memory, while the strange and almost 'lounge-like' Samael atmospherics opening "Release Me" erupt into one of the more glorious, melodic sequences this side of Triarchy of the Lost Lovers.

A couple of the numbers might not be quite so distinct as those I've mentioned ("Quintessence", "Under the Name of Legion" for example), but they all have at least something to offer. As a whole, Genesis is more forceful and brightly produced than Khronos, with the ambient choir and synthesizer aesthetics sitting well upon the edifice of the strong riffing foundation. The drums and vocals likewise sound brazen, modern and polished without ever feeling overproduced, and despite the glint of futurism in the engineering, Rotting Christ retain all the striking, unique characteristics that they had mustered even as early as Thy Might Contract or Non Serviam. 15 year and seven albums into their career, there's no sign of weakness worth exploiting, and while the title of Genesis might imply a greater sense of rebirth or innovation than transpires here, the album is another suitably haunting and blissful reminder of who your festering and formidable savior is.