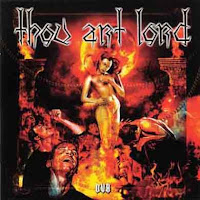 Being the side project of several of Greece's most important metal acts, it's understandable that there would be gulfs in Thou Art Lord's release schedule. Sakis Tolis was off touring and storming the world with his mainstay Rotting Christ, while Magus Wampyr Daoloth enjoyed a lesser measure of success through Necromantia. The vocalist Gothmog had exited the premises by this point, so Sakis and Magus would both serve as substitutes, but they also brought in a pair of hard hitting guests: drummer Lethe of Mournblade and Order of the Ebon Hand, and guest vocalist Spiros Antoniou of atmospheric death kings Septic Flesh. Perhaps the highest profile lineup of any Thou Art Lord recording.

DV8 is also the best produced, sound better balanced than either of its predecessors Eosforos or Apollyon, while maintaining the same black/death hybrid aesthetic laced with slight touches of the symphonic or atmospheric elements that the members' had used in their primary bands. "A Chaldean Hex" features crisp, driving guitars redolent of the harder Rotting Christ material, while eerie harpies and subtle choirs are threaded through in an almost electronic context. I rather enjoy the break with the horn over the thrashing bridge riff that then explodes into the lead, and it's a straight shot to the intense thrasher "Baphomet's Meteor". But these are not the only tricks in Thou Art Lord's deck: with "Behind the Druid Walls", they prove they can lovingly mesh a brutal, modern death metal aesthetic with walls of pulsing atmosphere and razor black riffing, and in "Society of the Dilettanti", they even offer up a mock groove/nu-metal sequence with bouncing rhythms and harmonics, only to sacrifice it into their snarling momentum.

If there's anything wrong with the album, it's that a few of the tracks move at near identical paces, and the patterns become familiar: crash, burn, and throw a couple of curious twists to the formula which are just enough to distract the listener from feeling he/she just heard the song a few minutes prior. Sleek, modern and deadly, and perhaps the best proof of concept that Thou Art Lord has ever released, but still lacking the overall distinction of the members' mainstays. Daoloth keeps the bass busy, but since it's just not as important here as in Necromantia, we're far better introduced to Tolis' guitars. Otherwise, though, the engineering of the album truly brings the band's varied elements into the 21st century, without throwing their original style of Eosforos entirely under the bus. If you liked the previous albums, then I see no reason you wouldn't also enjoy this. It's a marginally superior effort, but believing these practiced gentlemen capable of a more poignant slurry of miracles than what they've developed here is entirely warranted.

Posted by autothrall at 9:44 AM