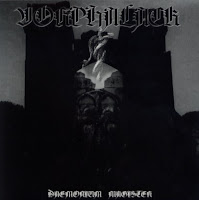 The Daemonium Magister EP is a prime example of where one might appropriately apply the cliche 'too little, too late' in the black metal genre. Surely this is the most cohesive effort this long-standing yet virtually unknown Greek outfit have released, if only because it draws ever closer to the standards that many of the European scene's competent practitioner's had already been exercising for years, sort of a mix between the cryptic darkness of Mayhem and Emperor in their primes, and the layered but simple textures of countrymen Nocternity. Granted, this is painfully brief, just two tracks totaling around 13 minutes, and we haven't heard from Vorphalack since it's release, but Daemonium Magister surpasses their 1998 EP In Memory... as the nearest they've grown to a qualified success.

Of the pair, the title track is the more compelling, due to the creepy and eloquent atmospheres the band conjure up through distant bells, chimes and the resonance of the vocals. The riffing here is quite primal, almost a hybrid of old school Florida death and Norse black metal, and in combination with the crashing drums and snarling, fulfilling vocals, I'd have to say this is the single best track of Vorphalack's entire career! "Travelling Through Parallel Dimensions" is comparable, with a respectable 90 second ambient passage that builds to the blasting, wall of violent sound inherent in the guitar tone, and it shares that same desperation, but overall it was not quite so dark. That said, the production of both tracks easily supercedes the rustic primacy of their Lullabies of a Vampire album, bleak but not hollow, oppressive but not empty.

Unfortunately there is just not more to this, and while it's far better plotted than their prior output, it's hardly exemplary in of itself. For instance, it would be difficult to distinguish this effort from scores of other underground bands throughout the 90s. I'm not sure if there is any intention to continue the band's obscure legacy, but by this point they had unquestionably come a long way from Under the Sight of Dragon, and should Vorphalack ever once more issue its vitriol from the shadows, I do hope it will follow the standard set up by this carnal couplet.

Posted by autothrall at 8:07 AM