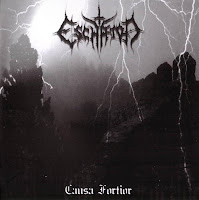 On its surface, Causa Fortior is not an incredibly adept offering, just another in an endless stream of European underground black metal recordings which do little to further or expand the genre boundaries or surpass its influences. However, these Greeks are slightly better at 'gunning for glory' than a number of their peers. The riffs are solid if repetitive, creating this harried vortex of desperation, the tracks almost unanimous in their airy warrior struggle. Admittedly, many of them speed along the same axis of pacing, and a particular ennui begins to set in, especially in the unnecessarily lengthy pieces which leave the 8-minute mark in the dust, but Causa Fortior is not exactly a mind-numbing bore, nor is it swollen to the point of no return.

What I like most about Eschaton here is the fibrous, raw thrust of their sound. As primitive as most of underworld acolytes demand from this medium, the earnest clap-trap of the drum kit meshes wholly with the bristling current of the guitar tone, and the decrepit vocals are given a wide swath of space over which to growl and grimace. This is one highly kinetic album, always pushing forward and rarely looking back or allowing the listener a chance to breathe, but that's not to say it's built entire of vapid blasting. "Transfigured Vision" has a decent thrash breakdown deep in the bridge, and "Steel Glowing in Darkness" is noteworthy for the streaming contrast of distorted bass and primary melody, while moving at a more belligerent mid-pace than many of its neighbors.

As I mentioned earlier, though, there are a few tracks in desperate need of some liposuction, namely the opener "Avenger, Dark Sun" and "Strength at Abound". The central riffs coursing through these are simply not among the more engaging on the album, and I felt like tuning out at numerous junctures. Cut down to 4-5 minute slices, they'd be far more effective. Overall, these guys are just not that strong at composing their guitars, so they rely heavily on the stratospheric rush of passion and atmosphere implied in their velocity. The notation wouldn't be out of place for their various, upper tier Greek contemporaries, like if earlier Varathron was sped up, but really, this comes off as another derivative of the Scandinavian school of philosophy. That said, Causa Fortior is a respectable, if forgettable debut full-length, its few moments of inspirational momentum outnumbered by its surges of somnolent sameness. Not bad, but not exactly teeming with merit either.

Posted by autothrall at 6:51 AM