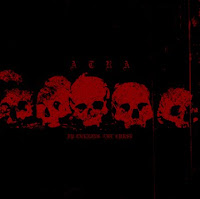 It might just be something in the air Down Under. Perhaps Atra has been bitten by the same insect that catalyzed the highly prolific discographies of other Australian necromancers Drowning the Light or Striborg. Either way, in just two years, Blackheart has released two full-lengths, a handful of demos, and now another EP which follows in the same distant, desolate footsteps of its elders. I'm not complaining, mind you, as I've enjoyed both of his albums (Death Coven in particular), but there's always the possibility that excess productivity can lead to redundancy, or worse, a quick burnout. At any rate, I'm thankful that hasn't happened yet, because Up-Turning the Curse conjures up the same overwhelming sense of oppression and callous atmospherics as its predecessors.

This Australian isn't so much about complexity as he is about straight, grim black metal riffing that is slathered in such resonant, decrepit vocals and airy, lurching production that hearkens back to the Norse masters Darkthrone in their early spin towards the genre (Ablaze in the Northern Sky and Under a Funeral Moon more than Transilvanian Hunger). The riffs are admittedly simple and derivative for the genre, but Blackheart's carnal, abusive rasp and the blood sucking enthusiasm he has for this style truly make the difference. "Wander the Absence" has thick layers of fuzzed out power laden in evil, winding melodies that evoke the cryptic doom of enclosed caverns and sepulchers. "Up-Turning the Curse" transforms from freakish, swelling ambiance that would have been right at home in some tense, cult horror scene, into a rifling, overwhelming surge of howled vocals, while the organs/keys continue to ring aloft.

In fact, the ambiance seems to be well integrated in general. The EP is book-ended by a suitable pair of nightmare scenarios ("Invocation of the Departed", "Possession") while a number of the songs encrypt more atmospheric resonance than anything off the sophomore In Reverence of Decay. My choice pick of this litter would be "Graveless Apparitions", a crushing burden of noisy, full-bodied dissonant guitars that rise to the level of the guy's prevalent, torn throat. It's pretty cool in general, and while it might not rise to the level of Death Coven's beautiful, wintry current, it's functionally suicidal and hope-consuming. Recommended if you don't mind a mildly noisier interface with the necrosis inherent to the medium.

Posted by autothrall at 6:57 AM