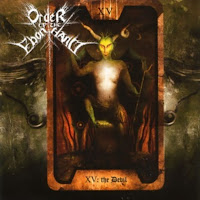 While their 1997 debut The Mystic Path to the Netherworld was about as mediocre as European black metal albums could get in that decade of expansion and exploration, subsequently dashing all my geek-driven fantasies of Magic the Gathering derived extremity, I'll have to admit that the Order of the Ebon Hand spent the next eight years honing in their chops. XV: The Devil is everything that album wished it might have been, and then some. In fact, this is an admittedly tremendous effort all around, precisely balancing both the tenets of wrath and variation into smoldering and thoughtful visions of sadism and fell majesty. It trumps the debut in every conceivable category, from the strong production values to the thrilling, ecstatic mirth of the consistent songwriting.

The album hits like a brick-truck of blasphemy, through the sheer walls of driving chords being wrought above Lethe's thundering beats. "For Marchiosas" and "To Alloces" might not be the riffiest black metal tracks you've heard, but the patterns evoked are potent and immersive, and the symphonic elements that hover at the edge of the mix are well integrated into the storming metallic force, building tremendous levels of adrenaline excitement. The leads are moody and eloquent, the vocals ripe with hostility (if tonally cliche to a number of Swedish and Norse acts), and the band is quite competent in breaking velocity for some slower fare that is just as dynamic. "Gateway to Silence" bridges from a creepy, haunted ambiance into double bass driven chaos; "Eibon" plods along with a firm punctuality, female vocals drifting as a psychotic background narrative; while "Spellbound" phases between cleaner guitars to swells of violence.

Hell, the finale, "(You Are) The Gleaming King" is perhaps the most epic on the album, with an abundance of swaggering melodies. Not a track goes by throughout that doesn't have at least something memorable to offer, even if the band don't win points for innovation or originality. XV: The Devil is merely a well written exercise in blackened ballast, with a rich and full bodied mix that brings it in line with some of the larger named symphonic black metal groups like Dimmu Borgir, Emperor and so forth. Surprisingly, the style itself is not a major deviation from their ill-fated debut, they just pull it all together into something enduring. Even the lyrics have come along, chocked with evocative imagery and a stimulating meter, while engaging the fantastical concepts the band's very name evokes (though they're sadly not dealing with the card game).

Order of the Ebon Hand is hardly an A-lister for the style, and unlikely to ever attain such a status, but there is no doubting the massive strides they've made here. If you're a fan of well plotted, harrowing versatility in the vein of the Norwegian acts I mentioned above, or perhaps the Australians Nazxul (specifically their sophomore Iconoclast), then this is worth tracking down.

Posted by autothrall at 7:26 AM