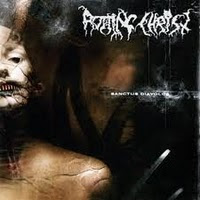 Sanctus Diavolos, the 8th Rotting Christ full-length, follows fairly close in the footsteps of its predecessors Sleep of the Angels and Khronos as far as incorporating diverse, worldly influences into a work of strong atmospherics. Curiously, though, the album doesn't seem to be one of their stronger works. Where the instrument was key for Genesis or Sleep of the Angels, the very core experience, it seems to have been reduced here to a series of rather unmemorable, chugging sequences which serve only as anchors to the use of the synthesizers, backing choirs, and other ambient aesthetics that the Greeks provide for the catchier bits of composition. For a decade or more, the band was always known for their majestic riffs, but here they seem reduced to a mere footnote.

As such, the album turned out to be my least favorite since Non Serviam. That isn't to say it's bad, because the band steps up a number of ingredients to compensate for the lack of strong guitars, but had they decided to balance the two better, I can't help but feel that this could have exceeded the two records directly before it. Where Sanctus Diavolos is at its most indomitable is in its somber Gothic-inflected tracks, like "Sanctimonius" which feels like an uncanny marriage of Gregorian chanting and Tiamat's Pink Floyd era, driven by the bass. Or the title track itself, which has small spikes of gleaming guitars that along the escalating, operatic vocals and tribal undercurrent of percussion. There are tracks upon which the guitar is more prevalent, like the punchy and familiar surge of "Thy Wings Thy Horn Thy Sin" or "Visions of a Blind Order", but these are more about percussive force infused with Gothic eccentricity than evoking the majestic power of yesteryear's riffing. There are also some tracks that feel derivative of prior writing, like "Doctrine" which has a chord sequence nearly replicated from The Sleep of Angels.

All in all, there is still a current of subtlety and grace here which creates that ever distinctive Rotting Christ individuality, and I enjoyed how the metallic ingredients characteristics with the classically endowed influences. But it's one of the few efforts in their career where I feel that relatively substantial swaths of material could have been clipped or better written to provide a more fascinating and immersive work more consistent with its siblings. The lyrics remain interesting if not complex, the production here is about as processed sounding as the album before it, and the band's sense for exploration not impacted in the slightest, but I'm just too hard pressed to recount almost a single guitar riff throughout the entire 48+ minutes. And when you're a metal band, especially one as good as this, those are rather implied and important. A decent listen for its overall, darkly ascendant appeal, but not even remotely a highlight of their career.

Posted by autothrall at 7:01 AM