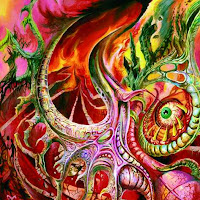 From the spiraling chaos of its beautiful cover art, to the bare bones and carnal quality of its production, Sleepers in the Rift is one ace goddamn death metal album. The Swedes are admittedly quite retro in their take on the genre, and so one immediately would draw the conclusion that they're yet another in the tireless charade of bands emulating Entombed, Dismember, Carnage, Grotesque, Grave, and their ilk, but they're also one of the few projects I've heard lately that truly overcome the tired stereotypes to produce something effectively grimy and entertaining. Think of them more along the lines of Bastard Priest, Tribulation or Repugnant in their attempt to strip the sound down and slather it in raw, nearly crust-worthy admonition that the niche is dead in its tracks.

For one thing, Sleepers in the Rift is brilliantly paced. There's enough core variation in the riff writing that you never feel inundated with the same thing twice, and the band is not afraid to expand upon the envelope of early 90s Euro death by means of some clinical thrashing or face rocking, morbid doom rhythms. Each of the songs here actually SOUNDS like its title, a fact I find fascinating. "Hymns to a Stiff" is a swaying, swerving tribute to a corpse, forged in loose architecture and appreciable dissonance. One can just feel the mortician's excitement as he or she probes and prods the recently deceased. The doomed, funereal pageantry inherent in a tune called "Lidless Coffin". The spacious, volatile contrivance of of a "Deformation of the Dark Matter", twisted guitar sequences crashing into a spectral void like streams of incoherent and congealed nightmare-stuff, the sustenance of Elder Gods. Or the sheer face rocking of "Ways of Torture", the most old school d-beat inflected trip on the entire album.

All components fuse together in an unholy merger of peak Autopsy (first two albums) and the Swedish pioneers of the late 80s through about 1992. The vocals are abrasive and agonizing, with a good deal of resonant character, almost a midway point between Chuck Schuldiner and L-G Petrov. The drums are organic, constantly crashing and driving the meaty but deliberately under polished guitar tone. The bass is not exactly a high point, granted, but when tracks like the raging "Dead Body Pile Necrophile" or grooving "Red Hook Horror" begin their passage to your cortex, you will quickly lose concern as the album's maw of terror sends you stomach-ward into its abyssal, digestive juices.

What's more, the rather lowborn, silly yet honest lyrical style serves as a strangely functional contrast to the cosmic, extradimensional eye candy and brow raising band name. And both tracks from last year's Creepy Creeping Creeps EP are included, so there's no longer a necessity for tracking that down. Sleepers in the Rift is simply marvelous, retro without ripping from its influences too directly; fresh and ferocious in its pursuit of strong riffing and gelid, mind warping atmospheres. It's 1990 all over again, and one of the more compelling takes on the popular Swedish death niche since Repugnant's Epitome of Darkness, or The Horror by Tribulation a few years ago.

Posted by autothrall at 6:39 AM