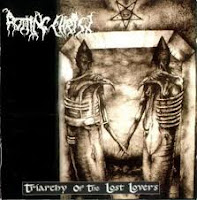 Though I've often juggled it between my admiration for the debut Thy Mighty Contract, or its direct successor A Dead Poem, it is the Triarchy of the Lost Lovers which ultimately stands as my favorite Rotting Christ record. One of those mid-90s efforts (alongside Samael's Passage and Amorphis' Elegy) that helped restore my faith that creativity and composition were not dead propositions in the metal realm, it forged all of the qualities of the Greek band's debut into a refined, epic songwriting sensibility that to do this never ceases to impress upon me when I'm in the mood, and it's a credit to the scene that spawned it, not to mention a refreshing and unique milestone in all of European black metal...

Well, except for the fact that it's more or less a more polished re-enactment of the qualities that exemplified the band's 1993 debut, Thy Mighty Contract. Slow to mid-paced material which is nothing if not a tribute to that ever elusive hallmark of metal masterworks, 'the riff'. Each of the nine tracks is glazed in simplistic, sweeping bombast as steady as the march of a well armed and trained phalanx of antiquity, to the point that it carries this militaristic grace. The keyboards that fleshed out the band's earlier work return here, but they're relegated even more into the backdrop, serving only to support the strength of the guitars rather than compete with them. And what fucking guitars there are...written in surefire, memorable patterns of glistening mutes and cement rhythms, more of an uplifting nature than the negativity and dissonance so often courted by the genre.

Don't get me wrong, Rotting Christ still indulge in the darkness of their mythic and historical lyrical matter, but there's an unusual, upbraided elegance to how these riffs storm beneath the bloodcurdling bark of Sakis Tolis. Among the most 'dignified' of the tracks are "The First Field of the Battle", its Metallica-basted melodies soaring over its placid if thunderous thoroughfare; "King of a Stellar War" with an admixture of ascending chords and angelic backing synths; and "Snowing Still", for its swaying, unforgettable verse hooks spliced with somber melodies. But choosing such as favorites would neglect the tremulous rush of "Archon", with its amazing muted bridge sequence, or "Diastric Alchemy" and its magnificent, soaring eloquence. "One With the Forest" is one of my favorite tracks in the band's entire catalog, a swaggering dynamic of dour and tormented Tolis throat-work, squealing delights and brilliant if subdued melodies playing counter to the primary rhythms.

It says a lot that even the worst song of the lot, "The Opposite Bank" carries much of the boons of its neighbors, it's simply a fraction less unforgettable than the rest. Triarchy of the Lost Lovers sees the band at a new plateau of production values that the band would never retire from in the rest of their history (thus far), with brazen and clean guitar tones set at just the right amount of spring, step and overdrive. Solid, rock-based drumming with a modicum of double bass work added to the substrate. Perfect bass levels, never too and never obscured by the front and center guitars. Light keyboards for an airy atmosphere, and most importantly, one of Sakis' best performances on any album.

The lyrics are simple, but strung out in the poetic splendor of 'relightened stars', 'unwrought stones/amphoras and bones', 'freezing myths' and 'sallow mass', images of sadness and shelter in an enchanting universe that can consume the canny observer well beyond the confines of a single lifetime. The perfect companion to such bright and engrossing musical fare. Triarchy of the Lost Lovers might seem too 'clean' for some, who might prefer the dank drear of the earlier albums' and demos' productions and the slightly more malicious vibe therein, but it's a monument to individuality, somewhere shy of perfection, but the closest this long struggling entity has ever come to such an achievement. Abstain from its stately spires at your own loss.