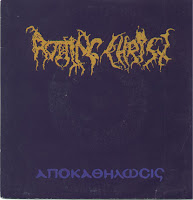 ΑΠΟΚΑΘΗΛΩΣΙΣ, or Apokathelosis, was another of those obscure and limited run 7" releases bridging the gap between the seminal Rotting Christ EP Passage to Arcturo and their first proper full-length Thy Might Contract. Like Dawn of the Iconoclast the year before, it consists of only two tracks totalling another 8 minutes, and at least one of the songs, "The Mystical Meeting" is available elsewhere (to be technical, both are available elsewhere). But I'm sure that most of us agree: it's best to hear such works in their original skins, their primitive glory (or lack thereof), and thus the charisma of ΑΠΟΚΑΘΗΛΩΣΙΣ is most thoroughly experienced by tracking down this rarity, borrowing, downloading, or whatever it takes to get your hands on it.

Compared to the tracks on Dawn of the Iconoclast, Apokathelosis seems a work of some refinement. The guitars still pummel along with a raw, muted fervor, but you can clearly hear that this is the Rotting Christ most will come to identify with from 1993-1997, Thy Mighty Contract through A Dead Poem. "Visions of the Dead Lovers" is threaded with an ethereal synthesizer line that creates an angelic against the fibrous, melodic momentum, while the bloodcurdling bark of Sakis Tolis is unmistakable. They also go for that mid-paced bridge that will prove a recurring motif through the first five full-length albums. "The Mystical Meeting" is slightly different, opening with a straight thrash chug that reminds me of S.O.D. or Sacred Reich aside from the rasped vocals. This is closer to the material of their Sataneus Tedeum demo from 1989, but once the opening sequence develops, the band throws in the keyboards, winding doom riffs and cleaner, narrative vocals that give it a comparable appeal to the work of Passage to Arcturo and Thy Mighty Contract.

These are cool songs, and they offer a ghastly glimpse of Greek distinction against the black metal spawning elsewhere in Europe, but again, it's mostly a vinyl collector's lovechild with very little substantial weight. Sitting in a crypt-like basement in 1993, spinning this on your phonograph while snorting some blow or sipping absinthe paints pretty much the perfect picture of deviance, so the nostalgic value is obvious, but it's not necessarily the first direction I'd point any newcomer to this band in.