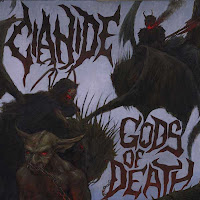 Cianide are one of those bands that I always checked out through the years when they were first putting out albums, but never found myself even remotely impressed with what they were doing. That said, they are immensely popular in certain circles, and it's not a surprise: they play traditional 90s death metal to a fucking fault, and for many, that is more than enough. There is no doubting the blunt sincerity of these Chicago dwellers. They tune their guitars low, they churn out grooves and chugging bludgeons beneath the solid smear of guttural vocals, and they persevere. Cianide has never really had a 'rough patch' or completely disappeared like many of their peers in the 90s scene; and they more or less sound comparable to their earlier works like The Dying Truth, and that's because it's the same three guys (Scott Carroll, Mike Perun and Jeff Kabella).

In my opinion, they operate in a space between Bolt Thrower's chugging surety and the more ominous, cavernous resonance of Incantation. Gods of Death shows some variation in speed and structure, from the burly grooves of "Desecration Storm" and "Forsaken Doom" to the punkish, Hellhammer thrust of "Rising of the Beast", "Idolator", or "Terrorstrikes", and this helps vary up the album enough that I found it more fun than several of its predecessors. "Rising of the Beast" is in particular a favorite here, for the thick weave of the bridge and how the vocals crush along over it. Then there are pieces like the brutish, death/doom "Dead and Rotting" or the even lengthier "One True Death" which further expand their palette of punishment, and I felt that they were both a bit too drawn out for my own tastes, not exactly 'boring', but starting to border on that reaction. Otherwise, the album is paced pretty well, and I found myself banging along to several of the barbarian rhythms.

I'd definitely like to note how cool the guitar tone is here, it has this authentic crunch that feels as its ripped straight through an amplifier in 1992, a coiled percussion that feels fluid with the strong and straightforward, rock inflections in the drums. The bass feels a bit monotonous as it follows along with the guitar lines, but Mike Perun's vocals definitely deliver a wretched feeling of having been in a street brawl with neolithic corpses fresh out of their ancient graves. Gravelly, gravity compelled aural constipation at its finest. Cianide doing what they set out to do, for their sixth full-length in 20+ years. I might not remember it two Fridays from now, but Gods of Death is a decent album from one of our most devout, unsung US death veterans, and worth experiencing if you want nothing more than to ball your fists up and feast on human misery like a streetfightin' troglodyte.