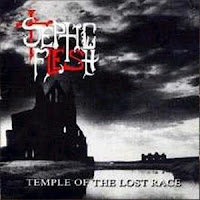 Though Septic Flesh is not a black metal band, the atmospheres created in their music conjure forth a similar, chilling aesthetic to their countrymen Rotting Christ or Nightfall. A pervasive gloom is experienced through most of their earlier recordings, as if crypts were yawning open to award the witness with both the stench of the lost and the treasures of the damned. Recent years have been all about the younger generation of bands attempting to recapture the depths of the early 90s using current studio configurations, but here was a band capable of creeping us out 20 years ago. Well ahead of their time. Foresight defined. Thus, as I'm bent on exploring the darker end of this ancient land's metal spectrum, I have decided upon their inclusion alongside the rest. 'Cheating', if you will, but it's my party and I'll cry if I want to.

Yes, Temple of the Lost Race was rather an anomaly for its day, and ample proof that the band has always been an overachiever. Curse their hides. The EP is extremely well produced for its times, with an impressive, rich guitar tone and some of the best, if understated bass playing in all of the death metal genre. Spiros Antoniou created a somber, flowing miasma beneath the rhythms and leads of his brother Christos (yes, another fraternal pairing akin to Rotting Christ) and Sotiris Vagenas. Spiros' accent gives a fairly unique spin on his vocals, but you can hear faint traces of early Pestilence, Therion or Aphyx in there. Synths are used liberally to concoct additional dimensions for tracks like "Another Reality", but the band is more than happy to just let the guitars do the talking for "Erebus", with its fluid, atmospheric solos; or the title track, which stands the test of time as one of their finest achievements.

Comparatively speaking, there is just so little redolent of this release. Perhaps some of the old Swedish stuff from Tiamat or Therion bleeds in, from about the same time, but there were not many precedents. To this point, death metal was largely a Florida or English institution with a few other countries throwing their hats into the arena, so for Septic Flesh to produce such a work was rather revolutionary. Solid double-bass techniques, apocryphal and mythological lyrics, memorable leads, brutal but intelligent vocals, and dark, meandering riffs from one of the best in the business. A promising start for a band who have never proven anything but (okay, exempting Revolution DNA). Well worth acquiring, however you must, if you're into any of their later works, from Mystic Places of Dawn to A Fallen Temple.