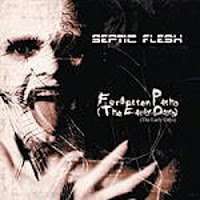 The decision to brand the Forgotten Paths (The Early Days) fan package with the same leering mutant and awkward, amateur logo that adorned Revolution DNA was perhaps not the best of ideas, for the material on this re-issue of the band's 1991 demo Forgotten Path is anything but relative to that disappointing modernization. This is a pre-Temple of the Lost Race Septic Flesh, lacking even the slight progressive and Gothic embellishments of the EP, but it's also damn good demo material which exhibits the strong foundation that they were building off as they veered into more melancholic territory. Crushing, simplistic death metal with strong songwriting, versatility and brutality in spades, not to mention the most bloodied vocal performance of Spiros Antoniou, redolent of Martin van Drunen in his heyday (1989-1992).

This is pure, groove-laden fare which owes an obvious nod to Celtic Frost, but will also titillate fans of earlier Asphyx (the van Drunen albums), Tiamat (up to Clouds), and Therion (the first two albums). Though they do incorporate a creepy, schizophrenic intro and outro, the pure atmospheric moments one identifies with Septic Flesh are constrained to the tolling doom bell that inaugurates "Curse of Death", or the tranquil segue which bisects "Unholy Ritual". The rest is a veritable riff-fest of morbid monstrosity, led by the superb atmospheric chugging of "Power of the Dark", and the almost punkish swagger of "Melting Brains". The solos here are fairly loose, but the rhythm guitars beneath them are usually worth the price of admission alone. The songs I already mentioned move at a steady, mid pace, but the band quickens the pace for the excellent "Curse of Death", a furious and refined marriage of old school muted bloodstreams and layered, melancholic chords. "Forgotten Path" itself is another worth mentioning, an epic bludgeoning through a number of tempos.

To help round out the celebration of the decade-old demo, the band has included a trio of live tracks recorded in 1991: "Power of the Dark", "Forgotten Path" and "Melting Brains". They do sound about as rough as one might expect, but in summation, not at all bad. The vocals have a tremulous resonance to them, and you can hear just about everything important, with the crisp and raw live distortion charming in of itself. The recording might not have been great, but the performance clearly was, so it's a worthy testimony that the band were potent and promising in not only the studio, but upon the stage. The only thing that's crappy here is the choice of cover and logo, though to be fair, the original demo was just a black/white illustration lifted from some classical source, and the original logo is a mess, lacking the character of that they chose for their first four albums (and would inevitable return to). Anyway, this is really good for a demo. The songs might not have the same intricacy as Temple of the Lost Race, but they still hold much appeal, especially as the old school, ominous sounds of the 90s are back in vogue.