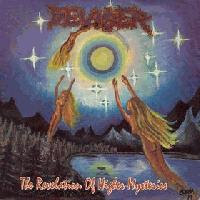 Talking about a disparity between cover artwork and content, the sylph-like ascendants representing this EP look like the work of some washed out hippie drone experimenting with colors, and not at all reflective of Deviser's sound. These guys were an anomaly in the Greek scene for playing a straight up brand of black/thrash that is more commonly associated with Swedish and Norse bands. The most logical reference point is Bathory, but you'll hear some very crude and sinister speed/thrash riffing courtesy of Possessed, Slayer and Venom, strung with leads, harmonics and all manner of derring-do on the part of guitarist Matt Hnaras who has more or less always been the core of this long-stander, since 1989 if you can believe that.

The only other example I could remember of such unbridled energy would have been the first Varathron EP (a sound they did not stick with), but this is wilder and more frivolous, and sadly not as strong in the individual riff writing. Hnaras manifests a devious rasp over the crisp and fluid guitars, but despite the obvious effort and busywork, the two tunes here (not counting the intro) lack the memorable guitars and chorus sequences that would inevitably turn out so well for Northern bands like Bewitched, Aura Noir and Maze of Torment. "Consumed by Darkness" is the more relentless of the two, with some snazzy tapping and lead breakdowns, while "The Shadow Where Evil Stands Still" is more grimy and diabolic, filling out much of its weight with slower, choppy paced thrashing rhythms. The latter is also the more dull of the pair, with pedestrian guitar lines that sound like any thrasher could fuse them together in minutes, but the opening sequence is at least passable.

The most notable aspect of The Revelation of Higher Mysteries, aside form its gaudy and god awful artwork, is unfortunately not the music, but just how different it plays out next to what the other Greek bands were doing for the time. Malicious and aggressive, raw and ripping, though not entirely abandoning the notion of musicality in its quest to savage the listener. Such a huge break from the largely slow to mid paced, keyboard-laden fare that was so popular at the time. I don't really enjoy the songs, but I've heard far worse in my time, and at least there was some potential here for an explosive force to rival their Scandinavian counterparts. Fortunately, Hnaras will evolve and improve the sound before long.

Verdict: Indifference [5.5/10] (half tearful and half defiant)