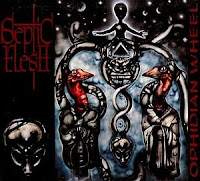 It would take a long time (almost 15 years) for Septic Flesh to top their third album Ophidian Wheel, and I say this as someone who has enjoyed, or outright worshiped nearly every full-length they have invoked with the one exemption of Revolution DNA, which simply did not have the staying power of its brethren. This is one of those rare, exotic and fluid efforts which manages to bridge the genres of death, doom and even Gothic elements into a nigh unforgettable dichotomy of drudging aggression, melodic glaze and vocal diversity. Where Mystic Places of Dawn and Esoptron once dared to tread, Ophidian Wheel travels further, and to this day it remains one of the finer Greek works of any extreme metal genre.

The nexus of its strength relies in the songwriting, wrought of both variation and memorable magnitude. The album's opener, "The Future Belongs to the Brave" (what a title) opens with a straight gallop of descending mutes below Spiros Antoniou's gruff, growling pipes, but then proceeds to open into this vista of dark, ominous synthesizers, baleful grooves and operatic female vocals that follow a doom-laden guitar melody. If there's one complaint I have about the production of the album, it's that these female vocals (courtesy of Natalie Rassoulis) are simply too loud in the actual mix. They're nicely layered, skillfully executed, and feel entirely natural in the Gothic bowels of the band's, but the sheer level is overbearing, especially here and the tracks "Shamanic Rite" or "Geometry in Static", in which they are so spiked and frontal in the verse that it feels like someone screwed up and accidentally mixed an operetta over the Septic Flesh record.

I have swum against rivers of fallacy
Chaotic symmetry, and have returned
From the point of weakness
To the root of triumph

But when the music is this disconsolate and beautiful, the gripe becomes all too minor, and I swiftly learned to either phase out during those seconds or just turn them down, and there are some points on the album in which they are almost mixed perfectly, like the gorgeous drift of "Phallic Litanies" which is about as good as a Gothic/doom piece could get; or the fascinating and malevolent "Tartarus". The centerpiece of the album, though, would be the burgeoning and blissful guitar duo of Sotiris Vagenas and Christos Antoniou, whose dual melodies catapult "Razor Blades of Guilt", "Heaven Below" and the title track into infinity and make it sound dreadfully simple. The drums and bass are solid, though perhaps overshadowed by the guitars and vocals (both harsh and clean), and the band even manages to knock out a few flighty and elegant instrumental segues in "Microcosmos" and "Enchantment": fully orchestrated, theatrical and heavy on the synthesizer.

The one song I don't get a huge thrill out of would be "On the Topmost Steps of Earth", which also happens to be the longest here (almost 7 minutes). The bridge is quite mesmerizing, but the riffs leading up to it just don't bear that same, depressing gleam of desperation. That said, just about everything else on Ophidian Wheel is like a solvent, abysmal ambrosia that lovingly wends its immortal fruit into the listener's conscience. If you can excuse its few minor setbacks, it easily stands the test of time, in the company of comparable European death and doom epics of the 90s, like Therion's masterpiece Lepaca Kliffoth, Amorphis' Tales from the Thousand Lakes, or Paradise Lost's stunning sophomore Gothic, which in my opinion are only favorable due to their superior productions and mildly stronger songwriting. With The Great Mass now available, a brilliant album that hasn't left my car stereo or iPod rotation in months, I can no longer deem Ophidian Wheel my favorite from this particular band, but it's unquestionably worth hearing, owning, and adulating, sweet and sour tears rent from ancient soil to kiss the listener in ecstatic thanatopsis.