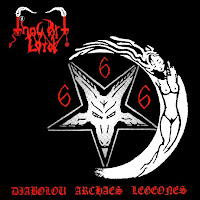 Another product of the tightly knit and incestuous Greek black metal scene, Thou Art Lord is a collaboration between two of its prime suspects: Necromayhem (aka Sakis Tolis) of Rotting Christ, and Magus Wampyr Daoloth, known here as 'Morbid', who is also one of the driving forces behind Necromantia. Daoloth appeared on Thy Might Contract performing keys and some vocals, so this is not the only instance of them working together, but they picked up a few other members and decided to create a side-project. Well, this golden apple does not fall very far from the tree: Thou Art Lord sounds like a more brutal, schizoid alternative to Rotting Christ, at least on this early recording. So much so that one who enjoys the one will undoubtedly appreciate the other.

The differences are in the more monstrous vocals, performed here by another of the members, 'Gothmog', backed by Magus and Sakis both. There is also a more complex, death metal subtext running beneath the familiar, steady driving beats and strings of predictable but evocative melodies. The downside is that there are only two tracks, both of which appeared on the project's Cult of the Horned One demo the same year, and its all over in less than 10 minutes. The third track from that demo, "In Blood We Trust", was released as a split with the Belgian outfit Ancient Rites, also in 1993. So essentially, this EP is just an example of clever double dipping. "The Era of Satan Rising" would be given a more epic, sweeping treatment with an expanded intro on the 1994 full-length Eosforos, and I have always preferred that version.

Here they just sort of break into that familiar, Rotting Christ-riff pace, and since "Praising the Impure" starts off at a comparable gait, the songs feel redundant with one another. Not to say that they entirely lack their moments of glory, especially in the latter's breakdown, but the whole shebang feels as if its traveling on ground that was better trampled by Thy Might Contract or the Varathron full-length His Majesty at the Swamp. It's not bad, and I actually do enjoy the Gothmog vocals, but the production is crude, chuggy and cluttered akin to Nightfall's Macabre Sunsets; and there simply isn't all that much here of note. Fans of the medium looking to check out this pairing for the first time would be wise to head straight for Eosforos, or the subsequent offering Apollyon.