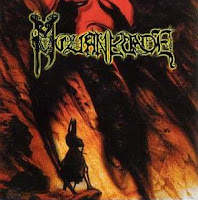 Not to be confused with the NWOBHM band of the same name, this Mournblade was the side project of two Order of the Ebon Hand, including drummer Lethe who is well known through the Greek scene, credited with performances in Septic Flesh, Thou Art Lord, Horrified, Chaostar and Naer Mataron, among others. The purpose of this self-titled album was to create a more vicious and orthodox black metal persona in parallel to Order of the Ebon Hand, whose debut The Mystic Path to the Netherworld was in all honesty one of the most mediocre offerings to come out of this particular scene.

You won't hear the keyboards and tempo variation present in that act, nor the wholly shoddy songwriting. This is basically cast in that straight blasting mold that several Norse and Swedish bands pioneered, like Marduk, Bathory, and Immortal, with a higher pitched rasp akin to Varg Vikernes of Burzum. Songs like "The Scythe and the Harvest" and "Ο Αιώνιος Πρόμαχος" operate on the premise of blast blast blast while the guitars shift through various razor-edged melodies to author a narrative of primitive pain, but there are also some deviations from the pattern. "Aries!" is mid-paced, rocking black metal with roots in Darkthrone and Hellhammer, while "On the Stone of Erech" is a black/thrasher with an eerie flute line conjured over its crashing waves of guitar (and a pretty damn good song). "300" is another solid, slower piece which pays tribute to the Spartans at Thermophylae well before Zach Snyder transformed Frank Miller's graphic novel to the medium of film, and there is one instrumental organ/choir piece which is confined to the outro, "Of Melkor and Ungolianthe", which is not bad at all.

I found Mournblade far more tasteful than the members' other band, a legitimate offering to the bands they grew up with, but that doesn't mean it's all that great. The riffs are genuinely vicious, and the production is raw and forceful without losing any of the musical luster, but there are definitely moments here in which I felt myself zoning out. Not because the duo performs the material poorly, but only because this sort of album had already come out scores of times from Northern Europe, and aside from a few of the Hellenic mythological lyrics, there is little to distinguish this particular recording from its betters. Still, if you're interested in the Greek bands which DIDN'T adopt the country's slower, majestic style of composition, then you can file this one right alongside Naer Mataron, Legion of Doom and Astarte as something to check out. The band is listed as still active, and several new members have joined, but as a decade has passed since the debut, and there have been no real developments, I'm not sure we'll be hearing a post-script to this one blast wonder.