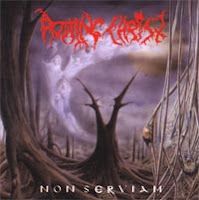 Non Serviam is an album I've long had a mixed relationship with, at first being incredibly underwhelmed by its content in the 90s; later, slowly coming to accept and mildly enjoy what I was hearing. Finally, in these days it seems to me the logical successor to Thy Mighty Contract, only slightly less exciting since that album served as such a glorious precedent. There is nothing out of the ordinary about this sophomore, it essentially channels the driving heavy and thrash metal influences into an even more melodic whole than its direct predecessor. Yet the songs do have a tendency to grow dull, with few twists and turns in their corpses that really snagged my attention. Rather, they wear their rotting hearts upon their sleeves boldly, and apart from a predictable shift or two, do not strive for much.

That said, Non Serviam is a beloved album by many, and probably the first that much of the band's enduring fan base were exposed to, since it generated some limited buzz upon its release. I really adore the cover art, though it seems more akin to the death metal genre than the actual content of the disc, a similar aesthetic to Obituary's unforgettable Cause of Death. The tone of the guitars does still feel rather dry and thin circa Thy Mighty Contract, but on the whole I'd say the mix is more level and consistent in general, though this characteristic also contributes to the noted lack of depth and contrast. One of the foci that drew me back to the album time and time again, forging my gradual appreciation, were the vocals. Sakis Tolis had really come into his own by this point, with a bloodied, painful rasp that was instantly distinguishable among the bands spanning Europe, and it works wonderfully with the largely solemn, melodic charge of the muted guitars that also dominate their sound.

Atmospherics are still available here, with graceful keyboard lines and thundering percussion trespassing upon the core metallurgy in "The Fifth Illusion", "Ice Shaped God" and the darker ascent of "Non Serviam" itself. Magus Wampyr Daoloth (Necromantia, Thou Art Lord) once again offers his eloquent synthesizers, and you can clearly feel his presence. I feel like the ambiance peaks upon the instrumental interlude "Fethroesforia", but the guitars seem to steer much of the album directly, from the clambering, sluggish majesties imbued in "Morality of a Dark Age", "Wolfera the Chacal" and "Saturn Unlock Avey's Son" to the slightly more propulsive proportions of "Where Mortals Have No Pride". It's all tight and statuesque, like the beloved and enduring architecture of the Greek landscape if one were to stand in the shadows it cast.

The majority of Non Serviam's hues are molded in a regal sadness that only Rotting Christ and their Greek peers seemed predisposed towards, somewhere at the nexus of the doom, heavy and black metal genres, and wholly unique to what the more infamous Northmen were producing. But for its strengths, I just don't enjoy the content as much as Thy Mighty Contract, or the following effort Triarchy of the Lost Lovers, which is essentially a Non Serviam 2.0 with more potent production and memorable songwriting. I've heard live renditions of several songs here that felt more thriving and alive, and I'm only happy to chew the boots of my earlier indifference to the sophomore, but I just can't hear how Non Serviam could deserve its cult status above its siblings, when the songs are simply not as distinct in isolation. For channeling that sorrow-stoked Hellenic miasma, it serves as well as most of its scene, but this is far from the first album I'd turn towards when seeking the full Rotting Christ experience.