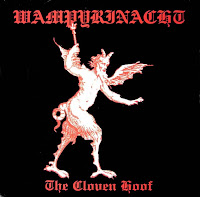 Wampyrinacht should have won an award for having one of the coolest monikers in the field of Greek black metal, but unfortunately it was not much help in the band making its mark. Featuring several members of the nearly-as-obscure Vorphalack and underground, they only made a few brief recordings, most if not all of which were gathered for this limited release EP, a total of five tracks including "The Darkest Sunset (Elisaveta)", which was their 1996 demo. Still, despite the recondite nature of this project, they actually had a few things going for them which could have earned them success had they stuck with it, and not yielded to the overwhelming odds of making headway in a quickly over saturating scene.

The Cloven Hoof opens with a Gothic/cheesy keyboard ritual, a harsh female voice sampled as it carries out some violation against nature and probably common sense. "The Mass of Astaroth", it is dubbed, and it sets up the rest of the EP wonderfully, because as laughable as it might seem, there is no denying that feel of campy 60s and 70s occult horror that it evokes. Then we get to the meat of the matter, Wampyrinacht's incredibly heavy metal-influenced style of black metal which incorporates incredibly melodic guitar work more than most of the dissonant drivers in the field. "Spellbound by the Wolves" and "Cup of Immortality" are loaded with solid riffs and soaring leads, to create an atmosphere more glory than most black metal bands have any right to, while the vocals range from girl-like cleans to evil snarls and Gothic droning (both male and female). I certainly heard a touch of Mercyful Fate in the guitars, but then the almost constant use of the female, ethereal presences gives it a wholly separate feel. The best individual song here is "The Cloven Hoof" itself, which opens with haunted strings briefly before becoming a bevy of solid, evil assault riffs, with ease the most gnarled and black entry here.

The production isn't great, but what would you expect? The bass is practically inaudible for much of the time, but you'll be paying so much attention to the guitar melodies that it won't really make a huge difference. I can only imagine how far Wampyrinacht might have gone if the actual mix of the music were more elaborate and they really got the levels of the various vocals correct. They might have risen up to contend with the more famous vampiric black metal outfits like Ancient or Cradle of Filth. But probably not?! Alas, there's just not enough here to go on, and the EP sounds too amateur that many would take it seriously, but I rather admire the camp, and it can be fun to listen to in short spurts of neckblood.