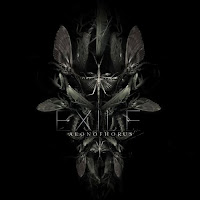 Australia is not the first place I associate with the progressive, tech side of the death metal spectrum, which is what made the Aeon of Horus full-length debut The Embodiment of Darkness and Light that much more of a surprise upon its 2008 release. As full of life as it was aggression, the album felt like a conglomeration of varied but fitting influences, from the more predictable sources like Death and Cynic to the wider reaches of ambient, 80s progressive rock, and perhaps a hint of jazz. But their true strength lies in their intolerance for needless, flashy flatulence at the expense of songwriting: these mates can tear like a maidenhead at a frat party when they choose, but the riffs and compositional structure ALWAYS comes first.

Exile is obviously a briefer showcase for their ability, with a few tracks of experimental nature like the synthesizer-gone-metallic-eruption title track/intro, or the unique progressive trip step remix of "Icon", which had appeared on the full-length. But more important are the true metal tracks, like the adventurous, riff-weighted "Light", ranging from stop/start hammering melodies through a chuggernaut breakdown through a sequence of elegant and well written leads. The vocals are split between a broader guttural and a more defined rasp, and they're likely the weak link in the chain, but they're nonetheless sufficient. It doesn't hurt that "Symbiosis" and the two parts of "Shatters" are stronger tunes than "Light", but they are fashioned from most of the same elements (though I really enjoy that late, atmospheric breakdown in "Shatters Pt. 2").

They seem to be going for a minimalist aesthetic in the song titles and lyrical concepts, which is interesting as it creates a huge contrast with the more harried, dynamic variation in the music itself, but for the most part it works. I didn't get nearly so much out of this as the full-length, but then that's a matter of the EP's duration more so than a reduction of effort. There are points at which Aeon of Horus seem almost too fragmented, and their brutal sequences never feel so brutal as, say, Decrepit Birth, but they can write hooks where needed, and they most certainly can write fluid leads that sweetly kiss the ears. Like The Embodiment, this is an independent release, but the band probably deserves an examination from the labels specializing in this field, because what they offer is unique enough in its own right, and the raw ability of the members is inestimable. But until such a time that they throw down for another, more substantial album, the material here is good enough.