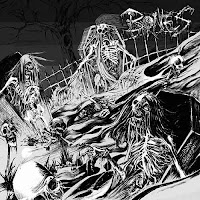 When Chicago's Usurper broke up a while back, it left a void out in the Midwest of crude and authentic US punishment. Not that I was a fan of all their albums, necessarily, but certainly their earlier efforts Diabolosis and Skeletal Season were formidable exports of brutal black and thrash metal that not many bands here were producing. Thankfully, the graveyard has been restocked with a fresh set of Bones, a band as primitive and simplistic as their name might imply, which rekindles the hostile hearts of Jon Necromancer, Carcass Chris and drummer Joe. Naturally, there are going to be comparisons made to the trio's alma mater, and the vocals and guitar tone are certainly redolent of the earlier Usurper records, but if anything, Bones is more bludgeoning and less subtle than even that formative incarnation.

The emphasis here is on neanderthal crushing death and thrash with a clear inspiration from the crustier side of punk rock. I've read many comparisons to Motörhead, but in truth this only manifests in a few of the more punk-fueled tracks like "March of the Dead", "Good Die Young" and "Lonely Death", in which you might also hear a hint of early Discharge. The majority of the record hits like a thrashing, belligerent weightstone, the crunch of the guitar and the massive and distorted bass competing in the mix alongside Jon's angry vocals. Some of the slower, thrashing pieces like "666" are engrossing enough to bang the head along to, but most do not focus so much around the riffs as they do sheer volume and raw force ("Bloodlust", "Bitch", "Slowburn"). They also incorporate a cover of Devastation's "Apocalyptic Warrior", thick and destructive as all hell breaking loose, with a messy but sincere lead bled across its bridge, which serves as a good fit for Bones, and a fitting tribute. Mind you, this is not the Texan Devastation band who released a few albums through Combat, but the Chicago underground group who had one self-released full-length in the 80s.

The key to Bones is that one must totally set aside any expectations for complexity, because the riffing is even more basic than most of Usurper's output. Like so many of the punk-influenced powerhouse thrash, black and death metal acts, the notation can often prove too predictable and creatively bankrupt to leave an impression, and while the wrath and energy of these veterans is never in question, that can sometimes be the case on this debut. There are very few moments here of surprise or hooks so memorable that they'd warrant profuse replays, and certain tracks are notably more catchy than others. That said, the fact that the trio is so ungodly loud and sincere goes a long way to compensate for any of the lagging tunes, and they never set out to write a record worthy of perspicacity, only pummeling fortitude. To that extent, Bones works, and it gives us something to look forward from these old, mighty hands.